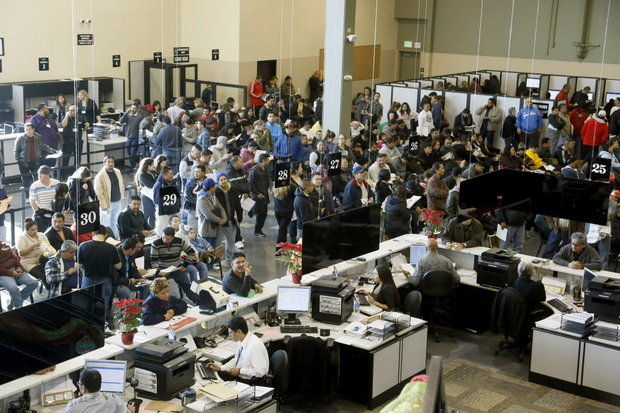 Watchdog.org reports that there were 6,951,484 overlapping voter registrations in the latest tally by interstate voter cross check in 28 states which does not include the largest states—California, Texas and Florida.

Our nation’s voter rolls are a mess….Sensible approaches to roll maintenance are fought tooth and nail by radical special interests who can use the duplicity to their advantage….the vicious cycle can be fixed if citizens wake up, stand up and refuse to settle for a broken system.

Executive Director of the Voter Integrity Project of North Carolina, according to Watchdog.org says:

The solution is as simple as one-two-three.

First tie the registrations more closely to (each state’s) Department of Motor Vehicles. All vote ID cards would originate from here. As is today, when we get an ID card from the DMV, we get registered to vote—but turning in your former state’s ID card should revoke your right to vote in the state that issued it.

Second, make it a felony to possess a voter ID card—or any other DMV issued ID card—from more than one state.

Third, we would only be allowed to vote from the address on that ID card. If a voter shows up with the wrong address, the vote is provisional until the card is corrected.

We don’t need a federal ID card to do this. In fact, it wouldn’t require any more feds to be hired.

The downside of this is that the White House has already anticipated this by allowing those who illegally invaded of our country to not only get driver licenses in some states, but social security cards as well. As states continue to tighten their budgets, there will be a decrease in staff, so their ability to cross check will be challenging.

In April, 2014, Watchdog.org reported 44,000 duplicate voters between Virginia and Maryland. Note that Virginia had their funding greatly reduced by their Democrat Governor, Terry McAuliffe (former Campaign Manager for Hillary Clinton).

Clancy offers these suggestions for Virginia:

California already has major voting issues because—as stated above—as of March 1, 2015, there were 110,000 illegals who were issued a license to drive plus an ID or proof of citizenship is not required to send in a mail-in ballot other than what the county voters’ registration offices have on file.

The other states that allow illegals to have a drivers’ license are:  Colorado, Connecticut, D.C., Illinois, Maryland, Nevada, New Mexico, Utah, Vermont and Washington. Each state has their own set of requirements.