On Thursday at a David Horowitz Freedom Center​ event, former CBS investigative journalist Sharyl Attkisson discussed her latest article regarding ways in which the Arab Spring ushered in a more organized, expansive version of Islamic terrorism.  She says this was a subject she tried to push while she worked at CBS but was stonewalled.

This chart, chronicling terrorism from 1970 to 2013 is extremely telling. 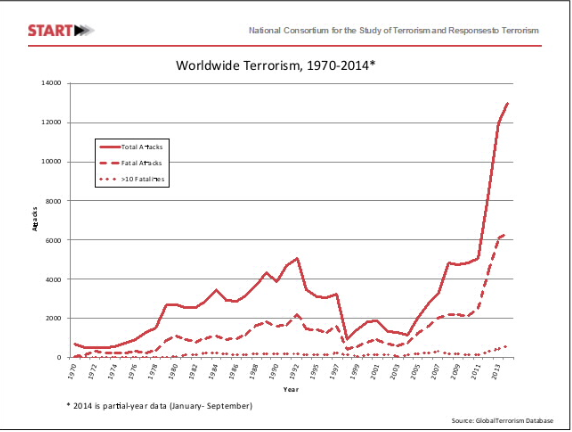 Attkisson writes, “In the first nine months of 2014, nearly 13,000 terrorist attacks killed more than 31,000 people, according to the National Consortium for the Study of Terrorism and Responses to Terrorism (START) at the University of Maryland.”

Sharyl also talked about the fall of Egypt and how unstable the entire region became:

“In the Arab Spring’s wake, Egypt and Tunisia disbanded the security structures that had helped keep jihadists in check, and freed many Islamist and jihadist political prisoners. In Libya, parts of the country fell entirely outside government control, providing openings for violent terrorist movements.”