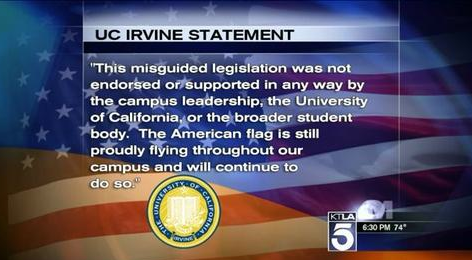 When people think of the United States, two things are usually thought of; the Statue of Liberty and the Stars and Stripes. Growing up north of the border, I was used to seeing Old Glory almost as much as the Maple Leaf. Being a huge baseball fan and going to plenty of hockey games, both national anthems were played often, as well as well as displaying the flags. Watching the Olympic Games it was easy to spot the Star Spangled Banner, as well as during award ceremonies since the USA was and is usually among the top three for many sports.

America has always been an exceptional country, and always a beacon of freedom, so I can’t understand the thought of people who live here who want to denigrate, remove or ignore something as symbolically American as our flag.

Recently the Associated Students’ Legislative Council at the University of California at Irvine voted 6-4 to a ban on displaying the U.S. flag in its lobby.

According to an article in the Orange County Register, It banned the U.S. flag and all other nations’ flags from the common lobby area of student council offices to promote “inclusiveness.” Two people abstained from the vote.

The resolution to ban the flag was written by Matthew Guevara, a UC Irvine student who had given 25 reasons including the notion that that the American flag had been “flown in instances of colonialism and imperialism.”

The university put out a statement after the vote, saying, “This misguided legislation was not endorsed or supported in any way by the campus leadership, the University of California, or the broader student body. The views of a handful of students passing a resolution do not represent the opinions of the nearly 30,000 students on this campus.”

The United States’ flag has been the symbol of America’s unity, strength, pride and inspiration for 200 years. Our flag colors are symbolic as well. Red represents Hardiness and Valor, White makes one think of Purity and Innocence and Blue represents Vigilance, Perseverance and Justice.

Our Flag is the subject of our National Anthem, as Francis Scott Key penned his poem during his night vigil in the harbor watching the British bombard Fort McHenry during the War of 1812. Our flag has always represented independence and the faith, loyalty, bravery and spirit of the patriots which have made America great and free. Our flag has always been a symbol of freedom for millions around the world. Our flag has been battered, tattered, stepped on and burned- all in the name of freedom, paid in blood and sacrifice by those who have fought and still fight to defend our freedoms.

While students come to the US from all over the world, most if asked, would assume to see the flag of the United States displayed in the United States. Just as if American students went to study in England, India, Germany or China, one would expect to see those nation’s flags flown.

Not everyone has such a misguided view of our flag however, as the ban issued was later vetoed by the student council’s executive cabinet who in a 4-1 vote decided the flag should remain.

Student council president Reza Zomorrodian said, while people may be upset with policies by the American government, the flag is nonpartisan. “We see the flag as transcending policy and politics, it represents American values… We disagree with the legislative council; they see it as a representation of policy.”

Joshua Nguyen, vice president for student services who attended the meeting, was in favor of the veto. He said it best, “The only reason you can take down this flag is because of the liberties given to you by this flag.”

Later as news of the ban spread, State Senators Janet Nguyen and Pat Bates, along with other state leaders, announced they were considering introducing a Senate constitutional amendment on Monday to prevent state universities from banning the flag.

While it’s good to see that sanity prevailed in this latest flag flap, it’s not a good indication that these kinds of decisions are made to begin with. While multiculturalism can be good for respecting and learning about other cultures, no other country would suffer having their own culture and traditions being buried so others can feel good about themselves.

In our ever tolerant, politically correct and multicultural world people have a perception problem when it comes to the United States of somehow being imperialistic. Maybe the students have an imperialistic view when they see the historic photo by Joe Rosenthal of the Marines raising the flag on Iwo Jima during World War 2. Maybe they fail to see the significance of the act. Maybe they don’t realize or care how many Americans died there and in places all over the world as they fought and continue to fight for freedom not just for Americans but for all people suffering under persecution, oppression and murderous regimes.

It’s not a surprise to hear that narrative spread on college and university campuses when so many progressives have used the term colonialist in describing the US. It’s interesting however to note that the only country America has ever colonized is America, and that was to gain independence from Great Britain.

Hillary Clinton: The Hypocrisy of a Woman Benefitting Off Of the Suppression of Other Women

Democrat Party Is a House Of Cards