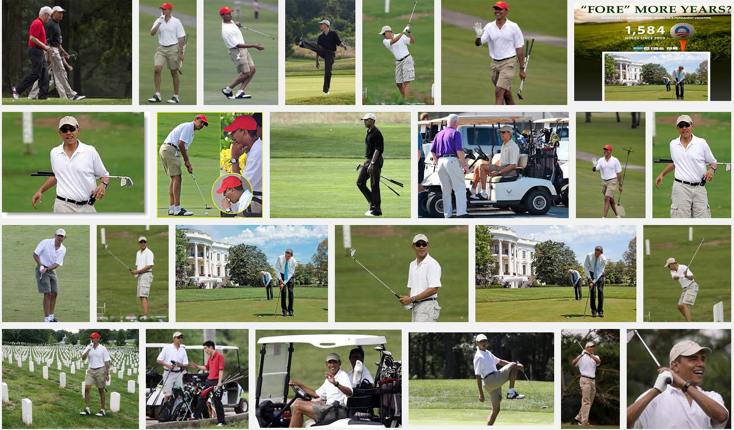 One thing about Obama that the American people can depend on is this:  Obama is golfing every possible moment of his day.

Currently he is defending ISIS for their atrocious acts of beheadings, and many of these atrocities have been against Christians.  The burning of the Coptic Christians is an act from hell itself, yet Obama defends their acts by citing the incomparable acts of the Crusades.  As of this writing, Obama has yet to call ISIS participants Islamic jihadists. In fact, it appears that he isn’t even offering support to countries where ISIS is slaughtering people.

Of course other countries respond forcefully and appropriately when their people are attacked.

When the Jordanian pilot was burned alive, Jordan retaliated by bombing the enemy.

When the Egyptian Coptic Christians were burned alive, Egypt retaliated by bombing the enemy.

In Norway, Erna Solberg, the new conservative prime minister, is ensuring the deportation of foreign citizens to combat crime.

Obama’s response to attacks: Golf.  The commander-in Chief may be anti-American and anti-Christian, but boy is he an avid golfer.

Four diplomats were slaughtered in Benghazi; Obama went golfing at a fundraiser in Vegas.

When Americans, Max Steinberg of the San Fernando Valley in Los Angeles and Nissim Sean Carmeli were killed by Hamas terrorists, where was Obama? Golfing at the Ft. Belvoir course.

James Foley, the American journalist, was beheaded by ISIS.  Obama–wearing golf clothes–gave a 3-minute speech before rushing back to the golf course, laughing and joking for photographers.

On February 25th it was reported that 150 Assyrian Christians were abducted from villages in the northern province of Hassakeh. As was reported, these captives were women and children.

Where is Obama’s outrage?  What has he done? He has defied the American people by allowing amnesty to illegal people living in this country, thus lessening instead of strengthening national security.   Something is seriously wrong with this scenario.

Americans should know the definition of the Islamic word al-Taqiyya: deception; the Islamic word for concealing or disguising one’s beliefs, convictions, ideas, feelings, opinions, and/or strategies.

Will Hillary Be the Next President?