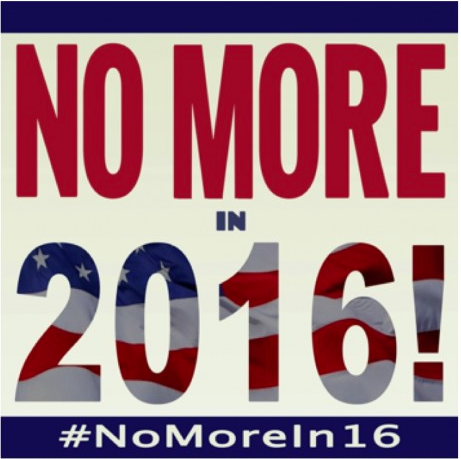 A new initiative to encourage voters to select only #conservative political candidates who uphold those values, #NoMorein16!, will start on Monday, March 23rd. Spearheaded by Texas-based Tea Party activist Phillip Dennis and the conservative blogosphere, #NoMorein16 is a message to fellow Republican voters who would consider voting for Jeb Bush or other non-conservative GOP Presidential candidates.

“I’ve been mad at the Republicans for a long time,” says Dennis. “Republicans [in the U.S. House of Representatives] vote conservative when it’s safe to do so. Behind closed doors, you’re going to see them raise the debt limit, support cromnibus, and amnesty, so that’s where this idea came from.

I’m not going to vote for a Romney or a McCain…they no longer get my vote by virtue of not being Democrat!” explains Dennis. “We have another party that‘s just a little less socialist than the other. When’s the last time you heard the Republicans really talk about repealing Obama Care?

Dennis goes on to explain that there are too many faux Republicans in elected office. “There’s a lot of Republicans tired of voting for the little bit better option than the Democrats. Every time the Republicans run a big government squish, when they listen to Karl Rove, we lose. Estimates 3 million fiscal conservatives stayed home instead of voting for Romney [in 2012].

Dennis says that many of the issues that more moderate GOP candidates, like Jeb Bush or NJ Governor Chris Christie support such as amnesty and Common Core are more in line with Democrats than Republicans, and do not serve conservative purposes.

“I am pleased that the grassroots conservatives are taking a stand and pointing out to the Party how to actually win in 2016: Simply nominate a bonafide conservative.

We have tried the moderate, Wall Street candidate and lost every time. Wall Street will never win Main Street. And in fact, Wall Street gives far more to democrats than republicans, and that is because democrats pander to them and help them amass wealth at the expense of the taxpayer. But the perception exists that the GOP is the party of Wall Street because of bad choices the GOP elite have made in trying to woo the left. It never works, the evidence is clear. The GOP must act like winners willing to lead and be accountable to the platform he grassroots has established. If the GOP gets this in 2016, they can’t lose!

In our new, bestselling book, What Women Really Want, my co-authors and PolitiChicks co-anchors, Ann-Marie Murrell and Morgan Brittany and I point out that the planks in the Republican platform are uniting, and will win both conservative, libertarian, and even common sense voters, especially women. But the GOP must refuse to accept a candidate who doesn’t submit to the planks in the platform that the grassroots in the party have worked hard to ensure.

As a lifelong Republican Party member, and the wife of a former State Senator for the Party, I am glad we within the conservative movement are having this conversation. Dialogue is critical to victory. And we plan to win in 2016.”

In closing, Dennis says, “I don’t see any difference between Hillary Clinton and Jeb Bush, except for pantsuits!  We want everybody running the #NoMorein16 hashtags on Twitter. No more. We’re not voting for you anymore if you run a big government squish!”

We Are Losing Many Of Our Excellent Teachers!