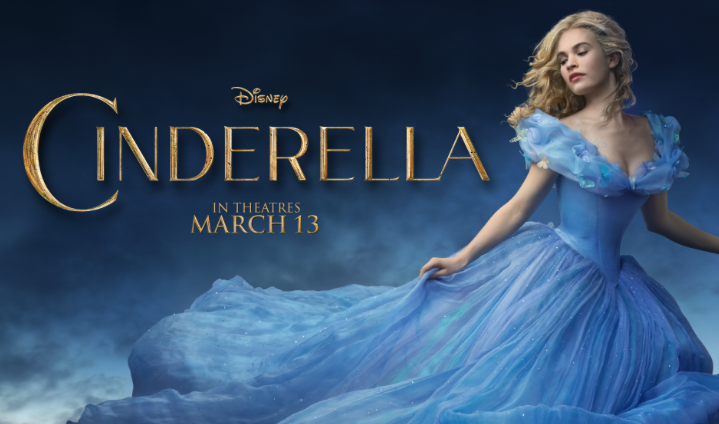 “Have Courage and Be Kind” is the theme of this enchanted, delightful and perfect film by Disney. Screenplay by Chris Weitz and directed by Kenneth Branagh, “Cinderella” was magnificent from beginning to end and I felt in the true spirit of what Walt Disney would want his films to be.

Lily James stars as Ella, the daughter of a traveling merchant (actor Ben Chaplin) and a loving mother (actress Hayley Atwell) who live a happy and charmed life in an enchanted countryside home. Upon Ella’s mother’s death from illness, she leaves Ella with words of wisdom to believe in magic and always, “Have Courage and Be Kind”. Several years later, her father remarries Lady Tremaine and her new stepmother (Cate Blanchett) with her two selfish daughters, Anastasia (Holliday Grainger) and Drisella (Sophie McShera), move into the family home. Ella’s father soon passes away on his travels, and Ella is left with her stepmother and two stepsisters, who soon reveal the cruelty of their true nature. Ella is made the house servant and sleeps by the fireside for warmth and is soon renamed, “Cinder” Ella by her mean family. But despite her new circumstance, Cinderella is always reminded of her mothers’ last words and finds solace in her ability to communicate with all living creatures (including several comical mice).

The story of Cinderella continues as she meets a young prince in the woods who is enchanted with her and soon has a ball at his palace in the hopes of meeting her again to marry. Helena Bonham Carter is unique, simple and clever as the fairy Godmother and other strong performances include Derek Jacobi as the king and Nonso Anozie (Samson in the Roma Downey televised version of “The Bible”) as the Captain.

Although the film is rated PG (don’t know why), it is a wonderful film for a family to see or those who want to believe that fairytales, happy endings and the spirit of Walt Disney still do exist.

Parenting - The Joy of the Journey

Trevor Loudon: "Democrats are all either communists or cowards."