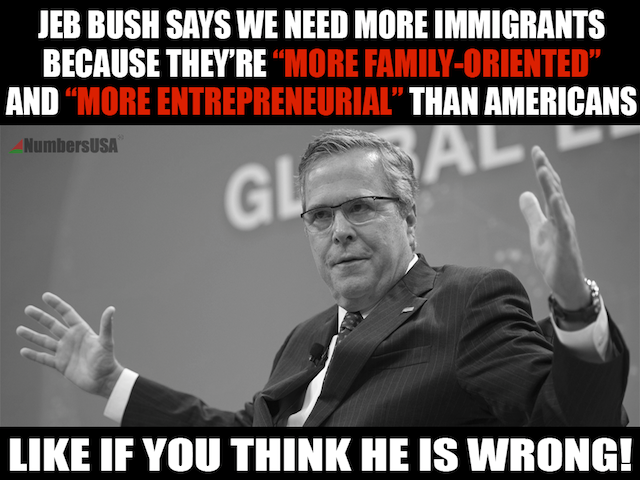 America has had enough insults and apologies under the current White House Resident. No one I know wants a repeat of that.  But lately “Republican” Jeb Bush has praised illegals as “economic-driven immigrants” and has been pushing for amnesty.

Can someone please explain to me how, if invaders are going to be so good for our economy, why do we need money from the federal and state budgets to facilitate them? If they are good for the economy, communities that have high invader population should be thriving, shouldn’t they? Shouldn’t California’s economy be through-the-roof vibrant by now, with all those family-oriented, entrepreneurial invaders in their state? Shouldn’t Arizona’s border be lined with Hilton and Holiday Inn properties to facilitate the traffic of these wonderful families, seeking to become American citizens? Shouldn’t Texas border towns have excess education funding, farmers cheering them on as they show up to be the best employees they’ve ever had?

No, that is not the case. People along the border are in DANGER. Sex trafficking, drug trafficking, assaults, robberies, murder and disease are what is thriving.

And yet Jeb Bush apparently wants to invite more of it, just like the current Resident. Anyone toying with the ideas of amnesty by any name is inviting more crime and destruction including increased death against law-abiding Americans. When a person is willing to subject hard-working American citizens to this kind of travesty, they do not belong in the Republican nominee line-up. They cannot swear to the oath that is required and have this mindset.

But here we go with Jeb, supposedly on best behavior as he is trying to woo Americans to make him our next White House Resident, exalting the invaders and trashing Americans. Maybe he believes that more invaders votes will count as he supports Obama’s tyrannical amnesty actions. If that is the case, then apparently he believes in voter fraud.

If somehow Jeb begins looking like the golden boy rather than the leftist he really is, we can thank Obama’s net neutrality for that. Everyone at MSNBC has already chosen Jeb as their Republican pick. Since Jeb’s philosophy mirrors Hillary on practically every issue, why wouldn’t they?  Jeb Bush wants amnesty. He wants federal control–aka Common Core–over education. Jeb is so wrong on education and our children that to explain it would require an entire book. It would be entitled, “Big Government Trumps Parenting, the Common Core Way” or “How to Make a Billion Dollars for All My Rich Friends and Call it an Education Program.” He’s also wobbly on gay marriage, which means after he’s finished running for offices his wife will write a book saying they were for gay marriage all along (or at least that’s the Bush way so far).

Bottom line, it’s a win/win for leftists if Jeb wins the nomination.

My friend, Mark Kevin Lloyd, who I met during the last campaign season (you remember the one where we sent a record number of Republicans to bolster our message against tyranny) recently posted the following on social media rant regarding Bush:

“If this man (Jeb) thinks that immigrants are more family oriented, more entrepreneurial, more willing to work hard, more ingenious than the average American citizen I would like to know WHO he has been hanging around with.

He either believes that the average American is some sort of parasite living off the government teat, or some trust fund baby, like himself, who doesn’t have to work to just survive. If these groups are his reference then he is ABSOLUTELY RIGHT.

However, I think he should spend some time with the rest of us, the real average American, the ones that actually pay for everyone else to enjoy government subsidies and live a life of sloth and leisure. The same Americans who will be required to provide the unearned benefits for the newly arrived immigrants and perpetual parasites. 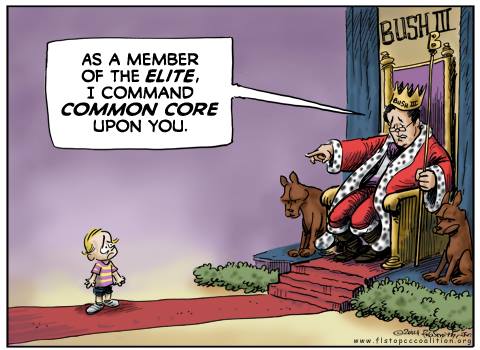 The GOP absolutely must have a nominee that at least does not already practice shutting down the voice of the States and We the People. Common Core fighters already know that Jeb has no problem with forcing his will on the people. Jeb does not care if you like his idea or not. He only cares how he can shut us up or get it past us anyway.

Fellow Republicans, it is up to us to show up and nominate someone who loves freedom and who will return power to the States. Our once great nation was great because we had 50 State governments United. I know very well that D.C. isn’t ever going to easily relinquish their power. We at least need someone who isn’t proactively making money by mis-educating our next generation to accept whatever the government dishes out. At least not someone like Jeb Bush who believes, as our current Resident believes, that he is a King who should inherit the throne.