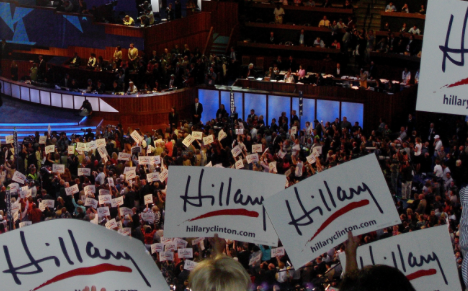 All of you people who are against Common Core but are “Ready For Hillary,” like your bumper sticker says…think again.

Donna Garner, an expert on education reform and a former teacher recalls how Hillary Clinton is tied to the current education reform. She’s been around forever and her evil deeds precede her.

Donna outlines her actions in the 80s – she’s been messing around with education since before the infamous Dear Hillary letter from Marc Tucker while her husband was president.

We have Hillary Clinton (et al.) to thank for the mess our country’s schools are in today. It is because of her Type #2 philosophy of education as birthed by the NCEE that we now have the Common Core Standards Initiative pouring into our nation’s schools, capturing the College Board and its products (AP, SAT, PSAT), and making billions of dollars in profits for Bill Gates, Pearson, Jeb Bush, and others. Even PISA, the international test, is being rewritten to align with Common Core.

Hillary Clinton is much in the news right now because of her possible run for the Presidency in 2016, for her probable felonious conduct with her e-mails, and for her questionable Foundation with its ties to foreign countries.

We also need to lay the blame for the Common Core Standards Initiative right at Hillary’s door. It was birthed at the NCEE and partially implemented under Bill Clinton and Hillary. Then under Obama, this germ of an idea has turned into the complete takeover of our nation’s school system by the federal government and the indoctrination of a nation of children into Obama’s social justice agenda.

We have Hillary to blame for a nation of adult non-readers who get most of their news from their social media gadgets; and it is for that reason that I have used my institutional memory to try to educate those people who have no knowledge of Hillary Clinton. If she is to be a serious candidate for the Presidency, we must warn the public.

Whatever happens in the classroom eventually controls what happens at the ballot box.

Common Core in Oregon: It Could Get Ugly

Is Lack of a Belief System Giving Way to Radicalism?