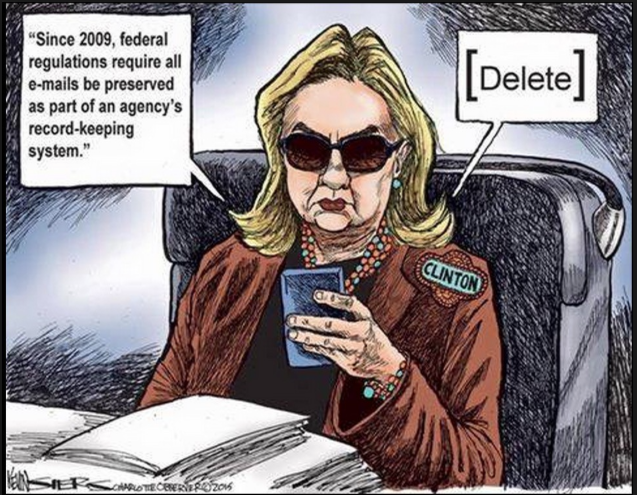 The former First Lady/Secretary of State/Senator/First Lady of Arkansas has the American people submerged in yet another Clinton scandal.  It appears Mrs. Clinton is not fond of following employee protocol and job specifications. At this point I am not convinced she understands that holding public office is in fact a job. Furthermore, holding office should entail the employee working for a paycheck …not as a financial burden to the taxpayer by way of unprofessional, scandalous, and illegal behavior that results in congressional investigations costing millions.

All Federal employees are required to set up a department email and use this address for any and all correspondence while on the job. She was the Secretary of State from 2009 to 2013 and mandated to use a governmental email to track and preserve documents for multiple reasons, one of them being to preserve historical facts. But first and foremost a government server is to maintain a level of National security that is not available for personal and home servers.

According to all sources the ex-Senator from New York never even set up a governmental account while Secretary of State. This standing alone says much for her professed idea of ‘transparency’. What about the people she was emailing? Her excuse is that she did it for convenience, knowing when she did email another government official that their emails would be automatically saved hence, saving her email at the same time. She is claiming that she only uses her personal server was for the ease of communicating on only device does not hold water when she accesses her Blackberry too, which is not linked to the government either.

Someone needs to tell Mrs. High and Mighty, not the point Hillary, not the point. And does she really expect us to believe that she never corresponded with the President during her four year tenor?  President Obama was asked when he found out about Mrs. Clinton’s lack of following procedure with her emails and he said “the same time everybody else learned it, through news reports.”

Shocking that the President of the United States of America appears to have no inside track to the Country he is commander in chief of.   As an American born and bred I am supposed to take comfort in the fact that either A, he is so busy with tee-times, fund raisers and vacations that he truly does not find out news any earlier than the general public or B, he is a liar, like Hillary Clinton.

On NBC Today Matt Lauer asked Robert Gibbs to give him “one good reason she did that.” All he gave was the flaccid response that he was sure Ms. Clinton had her reasons and she would “explain”.

When fielding questions about the now infamous Clinton emails, visibly irritated press WH Press secretary Josh Earnest squirmed while telling reporters that Federal officials emails are government property that are retained for public transparency. Earnest went on in verbal circles and concluded that he was sure Clinton would have to “explain” her actions.

At this point over 55, 000 pages of her personal emails have been turned over but the state department has requested more. The question that can only be truthfully answered by Mrs. Clinton is how do we know whether or not she actually turned over all of the pertinent correspondence since she is the sole arbitrator of her server, hard drive and all the information contained within?

According to Senator Clinton’s camp, all of these emails were reviewed by her staff and then turned over to the government. Am I hearing this correctly? Her people keep regurgitating that Mrs. Clinton followed the ‘letter and spirit’ of the law and that she wants us, the public to read these emails.

Oh really?  I do not believe her, but let’s say I did. She was most certainly not an efficient Secretary of State. Her job performance caused a cloud of suspicion and created so much unnecessary work and loss of taxpayer’s money.  Never confuse Clinton’s ‘explaining’ skills with intelligence. Hillary Clinton is not stupid. Senator Clinton knows exactly what she is doing as she behaves like an evasive two year old.

Imagine if former VP Cheney exclusively used his personal email in office and he was conversing with Oil Company CEO’s about energy legislation–Ms. Rodham Clinton would be the first one whining.

People are human and no one is perfect including politicians, but the Clinton’s are not merely “imperfect”, they are shady characters indeed. Not to mention they seem to have a hard time keeping track of things. President Clinton is history but his wife is looming large.

The Clinton couple has a mode of operandi and that is always claiming ‘much ado about nothing’. Still, the Beltway types are all a buzz with wonder about the political fallout and impact on any future Rodham Clinton Presidential run.

Clinton need not to worry though because she is amongst good company and liberals, as a group of idiots, always have their ace in the hole:  “It is Bush’s fault.”

Trevor Loudon: "Democrats are all either communists or cowards."