The GOP has an identity crisis and, in the infamous words of Jimmy Carter as he blamed the American people for his failed presidency, “a crisis of confidence”.  Its establishment in minority suffers from its aggrandizement resulting in the psychosis known as prosopagnosia.

What is a Republican today, and do any lifetime party voters recognize what has resulted from the contingent of Wall Street, pro-interventionists’ agenda against its Main Street majority? Does the GOP stand for anything that cannot be bought by a list of billionaires? Must the increased number of Tea Party congressional Republicans from the 58% in 2013 be silenced by crony capitalists aligned with Democrats in 2015? Must populism be confined to Dow Jones or Mr. Jones’ Manor Farm, or can it be returned to the true “Citizen Soldiers for Democracy” of “We the People”? Must we always be forced to ask that wretched rhetorical question of Hillary Clinton’s “what difference, at this point, does it make”?

The thought the Constitution is nullified by two of the three branches of the federal government is a source of discontent to all but the most radical Democrats. Often I read of socialists demanding the total abolition of the Constitution in favor of a system of common law, to hand over American popular sovereignty to the United Nations (UN) since Democrats are too incompetent to support their Marxist demands, or one whereby a president becomes a dictator creating policies suiting his agenda.

We the People categorically reject this. The GOP has no intention other than enabling Obama’s unconstitutional usurpations of power. In this guilt by association, the GOP is complicit due to neoconservative support of globalization aiding Democrats int having over to the United Nations our sovereignty. We must end all compromises with the establishment siphoning off the Democrat machine.

Having not recalled when I tweeted him if ever, Reince Priebus blocked me on Twitter, which can be seen here.

As I have voted in each election year since 2000, I find this in one sense amusing, but also highly offensive and an indicator the establishment’s narcissism yields no intention of supporting the conservative majority. Conservatives no longer have a voice in national politics as both the Democrats and the establishment labeled us “radicals” who are more dangerous than ISIS. The GOP now engages in Chicago-style Machtpolitik through campaigns that in Mississippi’s senatorial primary ended inexplicably in the murder of Mark Mayfield, a Tea Party official.

What can be stated of the Tea Party membership? Consider Gallup Poll from April 5, 2010. At least 28% of Americans supported the Tea Party at its fledgling stage of development; yet it is the will of the American people overwhelmingly being denied through corrupt bargains and “blood money”.

A report from Gallup Poll conducted last month (February 2015) asked independents which party they are more inclined to support. The revelation was very telling. Some 25% of GOP voters are declared as independents; another 43% among independents remain unaligned Just 44% trend Democrat and the gap is narrowing as time progresses. 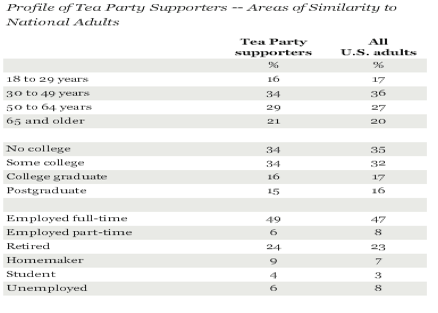 In 2010, the figure of Tea Party supporters are at 28% nationally which are in support while only 26% oppose. Only 28% are indifferent while another 8% have no opinion.

With respect to education as well as career, employment and number of retirees who are Tea Party supporters, the following figures reveal a still greater disconnect from the national political mainstream as conservatives best reflect what it is to be an American.

Another Gallup Poll from September 2014 suggested the rising tide of Americans calling for a third political party to be formed since the two at present are unsatisfactory.

Furthermore, the rise of Republicans calling for a new third party is at 46%, a total difference from the mainstream of just 12%, while those among the independent voters are at an astounding 71%. This is indicative of a major partitioning of the American political system and, if adequately addressed, the manifestation of a Seventh Party System which conservatives could dominate. Of the two major platforms, 70% of the GOP are conservatives and, as a subsequent poll suggests, a majority of 33% who are independents identify as the same.

Pew Research reported in January 2014 the rising trend of political discontent among voters is greatest among conservatives. The level of political antipathy, particularly among Republican voters, means conservatives will overwhelmingly choose to not vote over others because they have no confidence any change to the status quo will alter how business is conducted as usual.

The figures are irrefutable; our mission is clear. Fewer Democrats are disenfranchised because of the party’s strategies for attracting voters work well as they have always: quid pro quo. The GOP frequently loses voters and elections for not appealing to its overwhelming conservative base. Yet more independents currently identify as conservatives.

Furthermore, The Hill just days ago released a report where Democrats threatened to support of John Boehner to retain his power as Speaker of the House as the newest push for a political coups d’etat in the lower chamber is pending:

“In terms of the institution, I would rather have John Boehner as the Speaker than some of these characters who came here thinking that they’re going to change the world,” Pascrell added.

“Then we would get Scalise or somebody?  Geez, come on,” said Grijalva, who referenced House Majority Whip Steve Scalise (R-La.).  “We can be suicidal but not stupid.”

Boehner, who has grappled with dissent from the Tea Party wing since he took the Speaker’s gavel in 2011, has seen opposition to his reign grow this year, even as he commands the largest GOP majority since the Hoover administration.”

Finally in 2010, The Hill acknowledged that among Tea Party supporters, four in ten are regular Democrat voters. This indicates the same trend as during the Reagan Revolution that it is possible to acquire what UKIP leader Nigel Farage advised the delegates before the CPAC gathering, which are those who are supportive of such a platform in opposition from the neoconservative platform:

The national breakdown of the Tea Party composition is 57 percent Republican, 28 percent Independent and 13 percent Democratic, according to three national polls by the Winston Group, a Republican-leaning firm that conducted the surveys on behalf of an education advocacy group.  Two-thirds of the group call themselves conservatives, 26 are moderate and 8 percent say they are liberal.

In summation, 44 who might be polled out of a sample size of 100 would vote Democrat if they are independents with a liberal leaning; 43 people out of 100 would vote Republican, and still 13 would be in play that would ultimately determine a presidential election.

The trend overwhelmingly favors a third major political party to the tune of 58%. Republican voters are the most disenfranchised of the two parties, with none more polarized to either the liberal or moderate platforms than conservatives.

The trend that conservatives are the most prevalent of all political platforms in America remains steady, again according to Gallup Poll.  Moderates continue to rise, yet are robbing more from the liberal platform than from the conservative. While the gap between conservatives and liberals dropped to record low levels by 2014, those within the independent contingent are at the highest ever.  But most stunning is the following figure of Democrats declaring themselves “liberals” in comparison to those who are not. Whereas the overwhelming majority of GOP voters are staunchly conservative, the partitioning of the Democrats is broken on grounds far more pernicious to its lone means for success, that of course being the Marxist key to dialectic materialism, class warfare. The gap in total deficit for Republican voters registered as independents is its lowest in history, with Democrats leading by a 44% to 43% edge. Still more exciting is 33% of independents identify themselves as “conservatives” and are likely alienated by an establishment minority whose party abandoned them. To the contrary, only 21% of independents have declared themselves “liberals”.

Conclusion: A Call to Action

Actions, not words, will create the true change the conservative majority in America demand. Any opposition in this proposed new campaign strategy supports what Rep. Bill Paschrall (D-NJ) stated in an interview with The Hill as he pledged an alliance for his political survival and that of the establishment GOP as their allies: “In terms of the institution, I would rather have John Boehner as the Speaker than some of these characters who came here thinking that they’re going to change the world,” Pascrell added.

“This strategy was led by the typical Rovian consultants, like Rob Stutzman (of Arnold Schwarzenegger fame) and Kevin Spillanes (of no fame). These overpaid consultants lose time after time after time, but not before separating mega-donors like Charles Munger Jr. from obscene amounts of money. Karl Rove came to California to tell conservatives, “It’s better to lose with Kashkari than win with Donnelly.” He preaches an approach that, for the GOP to win over minorities, it has to lose with conservatives. The problem with this theory is the numbers tell a different story.”

A coalition of Tea Party candidates alongside independents from the Constitution and Conservative Party of the U.S.A. must cooperate in an aggressive political coups d’etat by running regularly in primaries followed by engaging in a mass exodus to leave the party at the discretion of each election year’s trends. Splintering the GOP by running coalition candidates as a third major party in general elections can only hurt the GOP, with conservatives having nothing to lose but in killing corrupt bargains obstructing its mandate for power. At worst, a slight Democrat majority in Congress will be crippled by the solid conservative bloc among an actual Tea Party caucus and of the moderate and still conservative-laden GOP that will vote in opposition to the Democrats on most bills. If 22% of Americans support the Tea Party, who among the 24% who are liberals and 28% who are moderates, much less those who comprise of the 38% of the conservatives in majority could attract to our cause? The ball is in the court of Tea Party conservatives and “Reagan Democrats.” It is advisable to take advantage of gifts history seldom provides.

What Does Shunning A Student Teach Them?