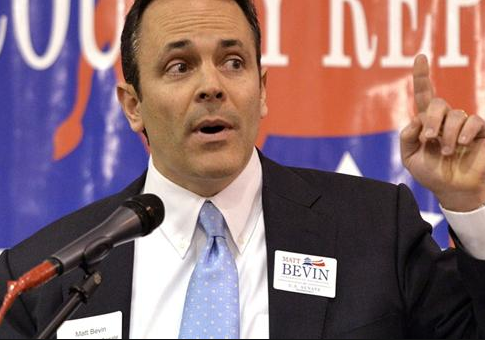 Don’t believe what you’ve heard about Matt Bevin. I write that with the assumption that most who read this column have been at least partially inundated by the millions of dollars in negative ads and press that were aimed at Bevin this past fall. It was during that time that Mr. Bevin had the temerity, according to some in the Republican Party, to run against Senate majority leader Mitch McConnell. Political campaigns, as we all know, can be a dirty and brutal business. Still, one can’t help but wonder if Mr. Bevin, a political novice prior to the Senate race, was taken aback by the brutal tactics that were employed to discredit him.

I suppose I could have asked him that when I had the pleasure of talking to him for over an hour last week. However, that particular question didn’t occur to me. Instead, I was struck by how candidly Bevin answered my other questions. I came away impressed by how completely different Bevin was than the caricature that some of the media tried to create. Far from being the TARP supporting (he didn’t) cockfighting fan (he wasn’t) Kentuckians have been led to believe he was, I found Bevin to be astute, forward thinking, and well versed on important Kentucky issues.

When I asked him what his top priority would be should he become governor, Bevin didn’t hesitate. Instead he took a politically uncomfortable issue head on. Bevin would make providing real solutions to the Kentucky Pension crisis his top priority. “There were over seven hundred pieces of legislation introduced in this last session,” Bevin said. “Two hundred of those made it out of committee. Not one of them was intended to realistically address the crisis with Kentucky state pensions.” Mr. Bevin did mention one bill that, though well intentioned, is not tied to market reality. See Bevin’s blueprint for Kentucky for the nuts and bolts of his plan. I may discuss the details in a later column.

I was greatly encouraged however by Bevin’s courage in tackling the issue. Neither Republicans nor Democrats have wanted to address this problem, because hard decisions must be made that will likely be unpopular. Therein lies the problem for the state and the nation; too few in leadership positions are actually willing to lead.

I wanted to get Bevin’s take on an issue that I have written about extensively, the very real “war on coal.” Bevin spoke at length on the topic. “Kentucky has some of the highest quality coal in the world, yet due to overregulation or regulations based in poor science, Kentucky is not being allowed to take full advantage of this tremendous job providing resource. The founders were clear in the 10th Amendment that States are sovereign. And no unelected bureaucrat has the authority to impose their will on a sovereign governor.”

Bevin continued, “The iron fist of the EPA comes with a velvet glove of federal dollars in the other hand. Regulations based on the whims of K Street and the more liberal leaning media should not drive environmental policy for Kentucky.” Mr. Bevin went on to say that regulations are not law. Failure to submit to the federal EPA may bring lawsuits but a Governor Bevin would lead Kentucky to fight back against those lawsuits. There is more of my conversation with Bevin to come in a future column.

Sometimes a writer just has to trust his instincts. Sometimes one just has a feeling. Many reading this may have a strong feeling that our state and our nation are headed in a precipitous direction. My gut tells me that we have arrived at this troubled state of affairs due to a dearth of real leadership. Matt Bevin came across very clearly to me as intelligent, honorable, well versed on the issues, a student of history and economically savvy. I’ve got a feeling that Matt Bevin is just the kind of leader Kentucky needs, for such a time as this.

Chris Skates is a columnist and novelist who won the best historical fiction award from the Christian Writers Association for his first novel entitled The Rain: A Story of Noah and the Ark. His second novel, entitled Going Green: For Some It Has Nothing To Do With The Environment, was compared by one critic to Grisham and Clancy and was endorsed by a world renown climatologist and best-selling author. Chris also speaks extensively. He has twenty-one years experience as a Chemist in nuclear and fossil fueled power generation. Much of his work has involved environmental compliance.

"Chappie" Movie Review: 3 Out of 5 Stars