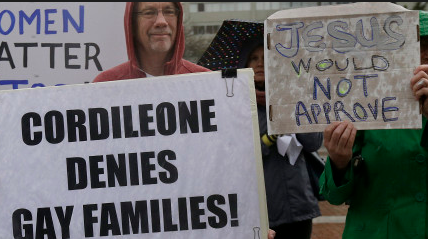 With government money comes government strings.  Nowhere is this more aptly showcased then the recent decision in the California investigation of San Francisco Archbishop Salvatore Cordileone’s written affirmation to San Francisco Catholic Schools that pornography and same-sex marriage are “inherently evil.” This is traditional Christian doctrine, but what is not traditional is that eight California legislators are making it their business to dictate to Catholic Schools what shall and shall not be taught about matters of faith.

The article points out that this is not the only time something like this has happened recently in America. According to the Wall Street Journal:

“Last year, the New England Association of Schools and Colleges opened an investigation into Gordon College—a Christian school. The association gave the college a year to review its conduct standards, which ask all members of the Gordon community to live by the Christian virtue of chastity—with the implication that Gordon could be at risk of losing accreditation. Gordon is currently undergoing that internal review and says it plans to submit a report later this year.”

In the case of the Catholic Schools in San Francisco I can only repeat my opening statement: With government money comes government strings.

When the Catholic Archdiocese’s took government funding to implement the Common Core into their curriculum, they gave up their rights to be a completely private school.

The government can now try to regulate what they teach in their schools, all under the guise of meeting standards.

I really hate to say it because I believe in the Catholic schools’ rights to guide the moral and religious teachings of their students, I believe it is fundamental to being an American, it is our first amendment rights; however, when they took the government funding, they sold their rights.