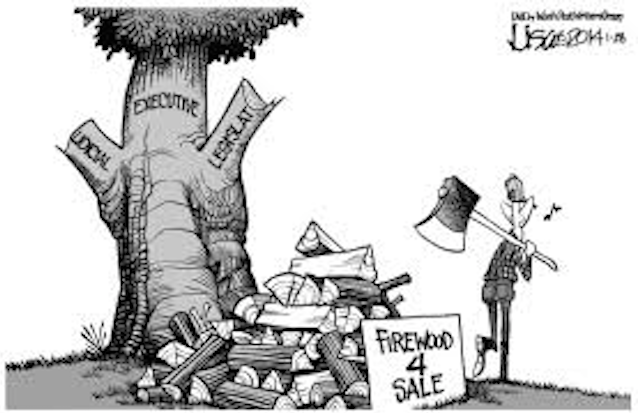 According to our Constitution, there are three branches of government:

Our Constitution according to Obama:

We the People: Our Responsibilities

I argue there is a fourth branch of government, which I would venture to say, none of us were taught in school. The fourth branch is We the People because the People oversee the three branches. It is our responsibility to make sure the government is subservient to us and ensures our fundamental rights provided by the Constitution: Life, Liberty and the Pursuit of Happiness. It is our responsibility to exercise authority over the government when they do not abide by the Constitution or our will. When our government becomes oppressive, We the People are the last resort—not to be taken lightly.

As citizens, we have the duty to vote, to report corruption and come against it. The Declaration of Independence states:

We hold these Truths to be self-evident, that all men are created equal, that they are endowed by their Creator with certain unalienable rights, that among these are life, liberty and the pursuit of happiness—That to secure these rights, governments are instituted among men, deriving their just powers from the consent of the governed. That whenever any form of government becomes destructive to these ends, it is the right of the people to alter or to abolish it, and to institute new government, laying its foundation on such principles and organizing its powers in such form, as to them shall seem most likely to effect their safety and happiness. Prudence, indeed, will dictate that governments long established should not be changed for light and transient causes; and accordingly all experience hath shown that mankind are more disposed to suffer, while evils are sufferable, than to right themselves by abolishing the forms to which they are accustomed. But when a long train of abuses and usurpations, pursuing invariably the same object evinces a design to reduce them under absolute despotism, it is their right, it is their duty, to throw off such government, and to provide new guards for their future security.

According to a website written by a former constitutional law professor, it comes as no surprise to us that Obama has broken his Presidential Oath to “…preserve, protect and defend the Constitution of the United States….”

He notes, “Executive Orders/Actions by the president were not designed for, nor do they give a president the authority to use as, a means to override or alter legislation or any other Constitutional violation. Executive Orders cannot defy Congressional intent.”

The TRUTH is Obama was not a Constitutional law professor: “under no circumstances would an offer to Obama be tenured.” “The thought that the law school could have made a tenure offer to a person with no academic writing was out of the question.” Former University of Chicago Law School Dean Richard Epstein.

Clearly Obama has not respected or protected the Constitution.

Click Truth Seeker for a list of constitutional laws Obama has broken (updated March 10, 2015) too numerous to mention here.

What Happened to America?

The seeds of our destruction have been sown through our government schools and public and private universities. Our schools no longer teach the foundations of our Constitution, and if any history is taught at all, it is revisionist history. They are turning out socially engineered robots ready to embrace the government as the supplier of their needs with morals as a thing of the past.