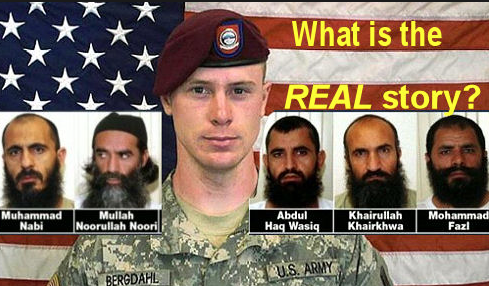 “This is a historic moment for us. Today our enemy for the first time officially recognized our status… It’s better to kidnap one person like Bergdahl than kidnapping hundreds of useless people… It has encouraged our people. Now everybody will work hard to capture such an important bird.” ~Taliban Commander

Maj. Gen. Kenneth R. Dahl spent months last year investigating desertion allegations against former POW Bowe Bergdahl. News came out back on December 19th, 2014 stating that the investigation was finished, yet details and conclusions had been kept secret until now.

An official US Army press conference confirmed March 25th that Bergdahl has been formally charged under the Army Uniform Code Military Justice.

Bergdahl had been claimed by members of his unit to have deserted his post before being captured on June 30th 2009 by members of a Taliban allied insurgent group. He was held for over 5 years as a POW.

Most people who were paying attention couldn’t help but notice the timing of Bowe’s sudden release early last year fell when scandals were breaking about the VA concerning Veterans and the outing of the CIAs Kabul, Afghanistan Station Chief to the press during a short couple hours long surprise visit to our troops by Obama.

According to reports it was because of Bowe’s fragile health that Obama’s promise about not negotiating with terrorists and US law was broken during the process of fast tracking his release.

News broke early on May 30th, 2014 of Bergdahl’s release from captivity while showing video of the Taliban releasing him into US Special Forces custody.

While Bowe was handed over to US Special Forces members, five top Taliban terrorist detainees from Guantanamo were handed over to officials from Qatar. The terrorists were identified as high risks and considered to be the most dangerous Taliban commanders held at Guantanamo.

No other administration has released top enemy combatants for a POW, especially during war. Obama not only negotiated the release of 5 top insurgents in a trade, but with the Taliban’s penchant for using RPGs to take down American Forces helicopters, that our Special Forces were used for such an operation, putting them in a lethal position during war was incomprehensible and despicable.

At the time however, Bergdahl was still considered a POW, not a deserter as some fellow soldiers had been claiming. The administration claimed that his health was deteriorating that he’d be executed by his captors as an excuse for trading terrorists for his quick release.

According to sources, Bowe’s health was fine. Even in the videos released he looked fine. The administration had known that he was being treated ‘well’ by his captors. Images of past treatment of American POWs during World War 2 and time spent in the Hanoi Hilton during Vietnam flash through my mind as I remember Bowe’s decent condition the day he was rescued. His health was supposedly deteriorating when he was seen in a video in January of 2014- yet all of a sudden 4 months later it was imperative to rescue him?

If the Taliban were going to execute Bergdahl, they would have done it at any time during the 5 years they held him. Terrorists don’t hold onto a political prisoner for very long if ransom demands aren’t made, and having a US soldier executed live on Al Jazeera during a time of war would have been a great propaganda tool for them.

Obama had 5 years to work on a release or re capture Bowe Bergdahl.

Terrorists have displayed their hatred and ideological contempt not just on fellow Muslims and Christians all over the world, but especially for Israel and the United States and our military in the past and still now. They have beheaded and dragged Americans through city streets burned their bodies and hung them from a bridge for all to see. They’ve beheaded children because of their faith in Jesus. They burned a Jordanian Airman alive in a cage and beheaded over a dozen Egyptian Christians on a beach in Libya. They have taken Americans as hostage before; and would not hesitate to do it again.

While not all hostages have been executed, those who have been rescued most likely would have met the same fate- unless there was a deal made behind the scenes, as this case with Bowe Bergdahl seemed to have been. Something kept him alive for 5 years during which time a deal could be made.

Defense Secretary Chuck Hagel testified at the House Armed Services Committee on June 11th 2014 that the swap with the Taliban may have been the “last, best” chance to secure his release. “We could have done a better job of keeping you informed,” Hagel had said. He called the operation an “extraordinary situation” and claimed that a logistical agreement had been released May 27, 2014, three days before Obama made a final decision to move on it.

It was known that at least 80-90 unelected members of the Obama administration were trusted with the information. It was also reported at the time that not only was Congress not informed, but neither were the General of CENTCOM or the commanding General at the time in Afghanistan. None of them knew that Bergdahl was being traded for 5 Taliban leaders until after it happened. The claims that the Administration couldn’t go to Congress as per the law was a lie.

Susan Rice was asked by Candy Crowley on State of the Union, about the tradeoff with the Taliban soon after Bowe’s release. Rice said Bowe was a legitimate POW who was captured on the battlefield and tried to explain why the Obama administration broke the law. “Well certainly after almost 5 years in captivity our concern was increasing every passing day, but we also indication that indeed his health was growing more fragile, he’d lost a good bit of weight and we were very concerned that time was not something we could play with…”

Again, reports indicated that when Bowe was released to the Special Forces, his condition was listed as good. They had a chance in 2013 to get him when they released other Gitmo terrorists. They could have had 30 extra days per law to wait for Congress but politically it was expedient for Obama to get it done to take attention off the atrocious policies at the VA among other scandals.

When asked about breaking the law, and why they couldn’t go to the head of the Senate and Congress, Rice answered,

“The DOD consulted the DOJ and given the acute urgency of the health condition of Sgt. Bergdahl, and given the president’s constitutional responsibilities, it was necessary and appropriate not to adhere to the 30 day notification requirement because it would have meant that potentially that the opportunity to get Sgt. Bergdahl would have been lost… We did do that in fact, we’ve briefed Congress in the past about this potential, and when the deal was done and Sgt. Bergdahl was in US custody is when we began making notifications to Congress.”

The DOD could have just as easily consulted Congress as well as the DOJ.

It seems that all Obama has done in the past five years is negotiating and engaging with terrorists, arming and training terrorists and letting them know our military plans, sitting back and watching the JV team grow. We now have the administration’s ‘diplomacy’ with Iran over their nuclear ambitions while also closely working among Iraqis who are being trained by Iranian Quds forces in Iraq against the Islamic State.

Bowe Bergdahl faces one count of Desertion under Article 85 and Misbehavior before the enemy and abandonment of his unit under Article 99.

The next phase of Bowe’s case will be an Article 32, to decide whether his case will merit a court martial, which would act in the same manner as a civilian grand jury inquiry. This will be announced at a later date, and will take place at Fort Sam Houston in Texas.

I can’t help but wonder if Obama and others will ever face charges for many of the dangerous and destructive acts they have perpetrated against our country and military by putting so many at risk by releasing terrorists while our military is still facing engagement with enemies, breaking US laws and lying to Congress.

Why I Highly Recommend the Film, 'Do You Believe?'