When Republicans complained that Obama refused to talk about Islamic terrorism, he accused them of playing into the hands of ISIS by demanding that he identify the enemy we’re fighting. 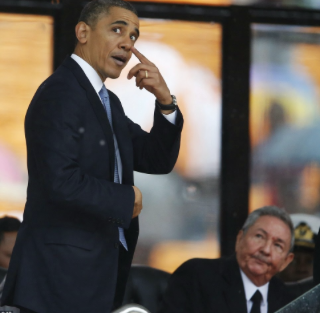 When they spoke out against his Iranian nuclear sellout, he accused them of “wanting to make common cause with the hardliners in Iran”. Those hardliners would presumably toe a harder line than Supreme Leader Ayatollah Ali Khamenei who responded to Obama’s outreach in his first term by saying, “The Islamic peoples all over the world chant ‘Death to America!’” and who stated last year that “This battle will only end when the society can get rid of the oppressors’ front with America at the head of it.”

(The Supreme Leader of a country which stones teenage rape victims and rapes teenage girls so that they don’t die as virgins, also claimed that “The European races are barbaric.”)

If the moderate Supreme Leader that Obama is dealing with wants Death to America, what could the real hardliners want for America that’s even worse than death? A third term of Obama?

Meanwhile Joe Biden, Obama’s number two, accused Republicans of undermining Obama. This would be the same Biden who threatened to impeach President Bush if he bombed Iran’s nuclear program and who blasted Bush and the idea of an Axis of Evil at a fundraiser in the home of a pro-Iran figure.

Biden undermined President Bush’s efforts to rein in Iran’s terrorism by voting against listing the Revolutionary Guard, which was supplying weapons to help the Taliban kill American soldiers, as a terrorist group (a position he shared with Kerry, Hagel and Obama) and berating Secretary of State Condoleezza Rice for not negotiating with Iran and Assad.

The toadying of “Tehran Joe” to Iran had already reached its absolute lowest point when Biden responded to the terrorist attacks of September 11 by suggesting, “Seems to me this would be a good time to send, no strings attached, a check for $200 million to Iran.”

The administration that Biden is part of has instead been releasing $490 million a month to Iran.

Biden, along with Kerry and Hagel, became notorious as the Tehran Trio during the Bush years for their advocacy for Iran and Assad, and their appearances at pro-Iranian lobbying groups and fundraisers despite criticism from Iranian democracy advocates. Biden, Kerry and Hagel, Obama’s VP, the Secretary of State and the former Secretary of Defense, all appeared at American-Iranian Council events, a group whose founder stated that he is “the Iranian lobby in the United States.”

Treason doesn’t get more treasonous than that.

Obama and Biden, along with their political allies, are trying to spin their shameless pandering to a terrorist state as patriotic and opposition to it as treasonous. The New York Daily News denounced senators opposed to an Obama deal giving Iran the ability to develop and deploy nuclear weapons as “Traitors”. The administration’s social media allies’ hashtag dubbed Republicans opposed to Iran’s nuclear weapons as #47Traitors.

Traitors oppose terrorists getting nuclear weapons. Patriots like Joe Biden not only support it, but they blast a president trying to stop it while collecting $30,000 at a pro-Iranian fundraiser.

“Treason doth never prosper: what’s the reason?” Sir John Harrington cynically observed. “Why, if it prosper, none dare call it treason.” But the Elizabethan courtier left out that when traitors rule, patriotism becomes treason. Obama commits treason and taunts his critics as traitors.

Republicans who want to see American leadership rise to the challenge of ISIS and Iran are accused of collaborating with ISIS and Iran by an administration that willfully lied and misrepresented the growth of ISIS for as long as it could and that is now doing the same thing for Iran’s nuclear threat.

Obama lied and claimed that ISIS was no threat even when it was taking over entire cities. Only overt genocide by ISIS forced him into his current stumbling action against it. Now the same sports fan who dubbed ISIS a “Jayvee” team not worth bothering with accuses Republicans of playing into its hands. 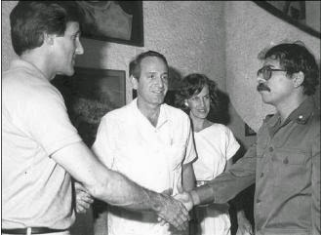 Sensible people consider letting a terrorist group win to be “playing into its hands”. Left-wing apologists for terror however claim that fighting terrorists “plays into their hands”. In the same inverted worldview in which patriotism becomes treason and treason becomes patriotism, what terrorists want most is for you to bomb them to oblivion while what they fear most is that you’ll just stand there and let them kill you.

Now Obama suggests that critics of his Iran nuclear sellout are playing into the hands of some imaginary hardliners who want America to bomb its nuclear program. These imaginary hardliners, like the imaginary terrorists, want to sabotage their own efforts to achieve their goals. And only Obama stands between them and the failure of their terroristic and nuclear ambitions. That’s why he’s a patriot.

And if you can follow all that, you qualify for a gig as the State Department’s new spokesperson.

Through the intercession of Jimmy Carter, Bill Clinton struck a non-binding agreement with North Korea on its nuclear weapons program. Like Obama’s Iran deal, the Senate never got to ratify it. Secretary of State Madeline Albright stated that “the framework agreement is one of the best things that the administration has done because it stopped a nuclear weapons program in North Korea.” It didn’t.

The rhetoric from back then also sounds familiar. Congressman Obey warned that Republicans dropping millions in fuel oil for North Korea was “mindbogglingly reckless.” The Honolulu Star-Bulletin urged “Stop GOP Meddling in Foreign Affairs.” Gore ranted that Republicans were “determined to wreck a presidency in order to recapture it” and accused them of “isolationism and defeatism”.

The Republicans were right. North Korea got the bomb and a lot of freebies from American taxpayers. The men and women responsible for supporting that disastrously treasonous policy slimed them for it. Now we’re in a repeat with many of the same politicians and pundits arguing that the only way to stop Iran from getting the bomb is by not doing anything to stop it from getting the bomb.

The first rule of treason is to call the other guy a traitor. Having aligned with everyone from Castro to the Supreme Leader of Iran, Obama has to make it seem as if it’s the Republicans who are the traitors. 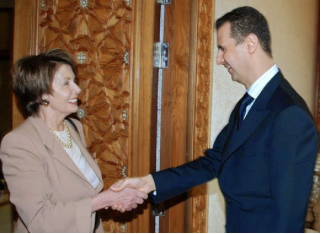 An administration of political hacks who spent the Bush years undermining the White House in every way possible short of officially defecting to the enemy now claim that dissent from their policy is treason. And they top that by reversing the motives of Iran and ISIS so that instead of wanting to destroy America, they really want to be criticized by Republicans and prevented from getting nuclear weapons.

This gibberish shouldn’t be able to fool any thinking person, but the idea that Kim Jong-Il wanted food, not nuclear weapons, when his entire policy had been the exact opposite, shouldn’t have gotten by anyone with an elementary knowledge of history and at least a single living brain cell.

No one wants to be a member of a party of traitors or of a government of traitors. Clinton and Obama didn’t accidentally stumble into their policies. They were guided by a deep rotten belief that the United States was always wrong and that the enemy, no matter how evil, had a legitimate grievance.

They can’t admit to this treasonous idea, even though they repeat it constantly in various forms, so their only defense is to claim that their treason is patriotism and that anyone who disagrees is a traitor.