If you want to infuriate a liberal, question his patriotism. He’ll sneer, mock and ridicule the question. And then when he is up against the wall, he will mumble that the real patriots don’t need to wear flag pins because they covertly perform their patriotism in the dead of night when no one is looking. 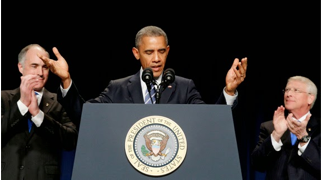 He may even trot out that fake Jefferson quote about dissent being the highest form of patriotism. No, Teddy Roosevelt didn’t say it either. He did however say that “Patriotism means to stand by the country… It does not mean to stand by the president… save exactly to the degree in which he himself stands by the country.”

And he meant it, ruthlessly attacking Woodrow Wilson until Democratic Senator William J. Stone called the former president “the most seditious man of consequence in America”.

The Washington Post’s Dana Milbank fumed that Scott Walker had replied to a question about whether Obama was a Christian with “I don’t know.” “This is not a matter of conjecture. The correct answer is yes,” Milbank angrily prompted like Orwell’s O’Brien lecturing Winston Smith about the virtues of Doublethink.

Of course the correct answer is, “I don’t know.” Or as Walker put it, “You’ve asked me to make statements about people that I haven’t had a conversation with about that. How [could] I say if I know either of you are a Christian?”

No one knows whether Obama is a Christian, loves the country or wears ballet slippers to bed. These are hypothetical questions. Milbank wants them to be prerequisites for getting elected, writing that Walker’s confession of ignorance on Obama’s inner faith “disqualified him” from being president.

The question was ridiculous and asked in bad faith. Candidates are not normally interrogated about the religions of other politicians. The only reason to ask it was to force Walker to affirm Obama’s virtues. Instead of providing testimony for his own faith, he was asked to provide testimony for Obama’s faith.

Call it the media’s Obama Inquisition. No one expects it, but by now everyone probably should.

Obama doesn’t need to love America. That would be one of those vulgar displays that our bicoastal elites sneer at and class together with Wal-Mart and country music. But Republicans still need to verbally profess that Obama is a Christian who loves America, motherhood and arugula pie. 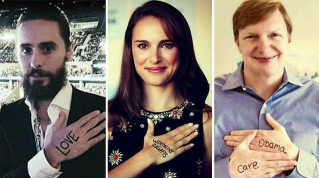 We no longer have a political test based on the love of the country, but we do have one based on the love of Obama. We don’t have to wear flag pins; we have to wear Obama pins. Showy displays of patriotism are for tacky flyover country types. Obama holograms, alongside Jesus holograms, are sold on the streets of every inner city. The upscale version of that is the ubiquitous Obama logo that can be spotted on the back bumper of every ecologically conscious Subaru from San Francisco to Boston.

And there’s nothing showy or tacky about those expressions of Obamatism.

Politicians no longer have to demonstrate love of God and country. Instead they, as Scott Walker has learned, have to affirm their faith in the verities that have replaced them; Obama and evolution. These are what a serious candidate in the non-exceptional Post-American nation of ours must believe.

To question them, even implicitly by failing to affirm them, is progressive Post-American blasphemy. And the Obama Inquisition is relentless in ferreting out even the mildest inquiring eyebrow of heresy.

We must have faith in Obama.

The left has replaced nationalism with a cult of personality. And cults of personality are fragile. We accept flaws in a nation because it includes our own flawed selves. But to believe in a man, he must be perfect. The naked emperor cannot be challenged because everyone is only one loud exclamation away from realizing that not only isn’t he wearing any pants, but that everyone else sees it too. And then the cult shudders under a wave of laughter traveling at the speed of sound from coast to coast.

The left whined that displays of patriotism singled them as if they were part of some lurking seditious force out to undermine America. Which is a perfectly absurd notion as Professor Bill Ayers could tell you. But now the media rants that Scott Walker’s lack of faith in Obama’s patriotism and faith are a “wink” and a “dog whistle” to the nefarious anti-Obama forces lurking in the heartland.

Paranoia about enemies of the country who must be stamped out has been replaced with paranoia about enemies of Obama who must be stamped out. It is not enough that a politician does not personally question Obama’s patriotism. He must also testify to Comrade Obama’s patriotism. That is what is truly being demanded of Scott Walker.

He must denounce the idea that Obama, who thinks the Bible has a verse in it about not throwing stones when you live in a glass house, is anything but a Christian. He must verbally assert that Obama loves America as that is the new post-American pledge of allegiance. It is not enough not to question Obama. Scott Walker must have faith in Obama’s goodness. And that demand is as Un-American as Bill Ayers and Jeremiah Wright.

For six years, America has suffered under a hysterical atmosphere of media paranoia about dark forces spreading hate and undermining Obama. Not even the most zealous anti-Communist ever spent as much time fulminating about secret subversives as the average MSNBC talking head. Even the mildest criticism has to be relentlessly stamped out and exposed as part of a vast anti-Obama conspiracy. 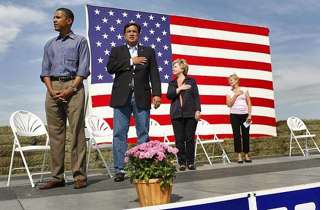 It has reached such a point that the failure to praise Obama disqualifies a candidate for public office.

It’s not a completely unprecedented state of affairs. Woodrow Wilson’s administration saw men jailed for everything from private conversations to making a movie about the American Revolution. Teddy Roosevelt, a former president, was threatened with prison by Democrats, both subtly and unsubtly, for his articles attacking the administration’s policies. But there was still no cult of personality of Wilson.

Democrats no longer have patriotism at their disposal. They can’t rally the nation for love of country. They don’t even believe in the government unless they’re running it. That just leaves them with a man.

The cult of personality is no longer just an option. It’s their only option. Obama is all they have.

And if you don’t believe in Obama, you’re a racist enemy of all that’s good and progressive who is going to liberal hell. Or as they call it, Portland.