“Verbatim drama, at its best, is aesthetically indistinguishable from high art.” — Michael Billington, The Guardian

LOS ANGELES (March 30, 2015) — Would you indict Darren Wilson for the shooting of Michael Brown? The controversial shooting will be reenacted on stage in FERGUSON, a new play based on actual grand jury witness testimony. Written by journalist and documentary filmmaker Phelim McAleer and presented by Theatre Verité Collective, four performances of FERGUSON take place as a guest production at the Odyssey Theatre, April 26 through April 29. The audience is the jury. How will you vote?

FERGUSON will be the first dramatization of the controversial shooting that prompted protests and riots, with protesters claiming that white police officer Wilson shot black teenager Brown as he was surrendering with his hands up.

“I want to bring the truth about what happened that day to the stage,” says McAleer, a celebrated journalist and filmmaker. “I think audience members will be very surprised, even shocked, when they hear the clear and unaltered truth about the events that took place on Aug. 9, 2014. There are a lot of myths and half-truths circulating about the shooting. FERGUSON is a chance to dispel these once and for all.”

McAleer said the theatrical establishment could find topics such as Ferguson too controversial to touch, so he is launching the play as an independent production financed by crowdfunding.

“I know people want the truth to be told, so now they can be part of that process by going to FergusonThePlay.com to help make it happen,” he said.

Helmed by multiple award-winning director Nick DeGruccio (The Laramie Project at both Laguna Playhouse and the Colony Theatre), FERGUSON will be staged as an evening of “verbatim” or “truth” theater, modeled on Tricycle Theatre’s wildly popular Tribunal Plays series that has been a staple in London for over two decades. Verbatim theater is defined as “a play constructed from the precise words spoken by people interviewed about a particular event or topic.” In this case, the audience will hear unaltered witness testimony, exactly as the Ferguson grand jury heard it.

As a journalist, McAleer covered the Troubles in Northern Ireland for The Irish Newsand UK Sunday Times.

“I’ve spent a lot of time covering crime scenes and court cases,” he says. “I’ve always been fascinated with the truth and with reexamining facts once the controversy and grief have abated. That is what I want to bring to the stage with FERGUSON.”

McAleer is also a producer and director of documentaries, including FrackNation, about fracking (“meticulously researched…provocative” — The New York Times; “briskly paced… [a] mischievous pic.” — Variety); Not Evil Just Wrong, examining the devastating consequences of global warming hysteria; and Mine Your Own Business, exploring campaigns by foreign environmentalists against large scale mining projects in the developing world, which the UK Guardian described as “A Michael Moore-style documentary [that] casts the green movement as the influential villain of a worldwide campaign to block development and deny people the chance of jobs and a decent life.”

McAleer is currently producing Gosnell, a feature film about Pennsylvania abortion doctor Kermit Gosnell, whom ABC News described as “America’s biggest serial killer.” As a foreign correspondent with the Financial Times and The Economist, McAleer covered the post communist chaos in Eastern Europe, and he is a regular columnist for the New York Post. He has appeared on BBC, CNN and Fox News, among others. 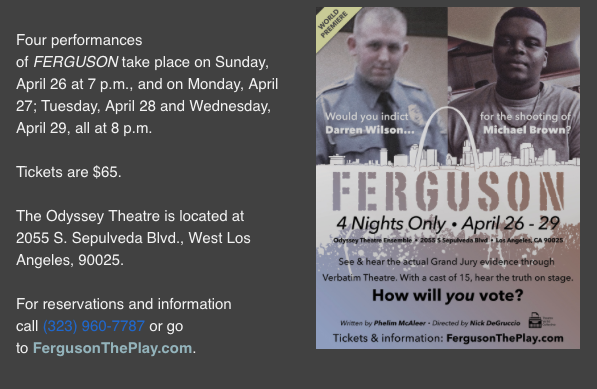 The controversial nature of McAleer’s projects make traditional financing difficult. With FrackNation, McAleer bypassed traditional funding methods and instead turned to Kickstarter, a crowdfunding website. It was one of the most successful documentary campaigns in Kickstarter history. In just 60 days, 3,305 backers donated $212,265. His Indiegogo campaign for Gosnell was the site’s most successful ever, with over 26,500 people contributing $2.25 million in 45 days. FERGUSON is also being financed through crowdfunding.  (To contribute, click here: https://www.indiegogo.com/projects/ferguson-the-play )

PolitiChicks highly recommends this new compelling ‘verbatim’ drama in which the audience will be the Grand Jury and every night they will vote whether to indict Wilson or not.

How will you vote?

Is America In Decline?

I Saw My Father's Heart Today