Yes, we are, as I include myself among those being fit for tin foil hats.

The reason we believe that there is a conspiracy to track our children from birth to adult (P-20W, anyone?) could be because we have seen the wording in the bills that have went through our legislatures outlining this education reform via Common Core.

Some of us also happened to see a little document put out by the Federal Department of Education called Promoting Grit, Tenacity, and Perseverance. Go ahead and download it if you like. It’s an interesting document. Especially if you’re a conspiracy theorist like me!

Make sure to pay attention to page 44 where you see pictures of technology that they would like to use on our children to monitor how they react to computer based projects, lessons, and assessments.

In the interest of saving time I will show you these pictures: 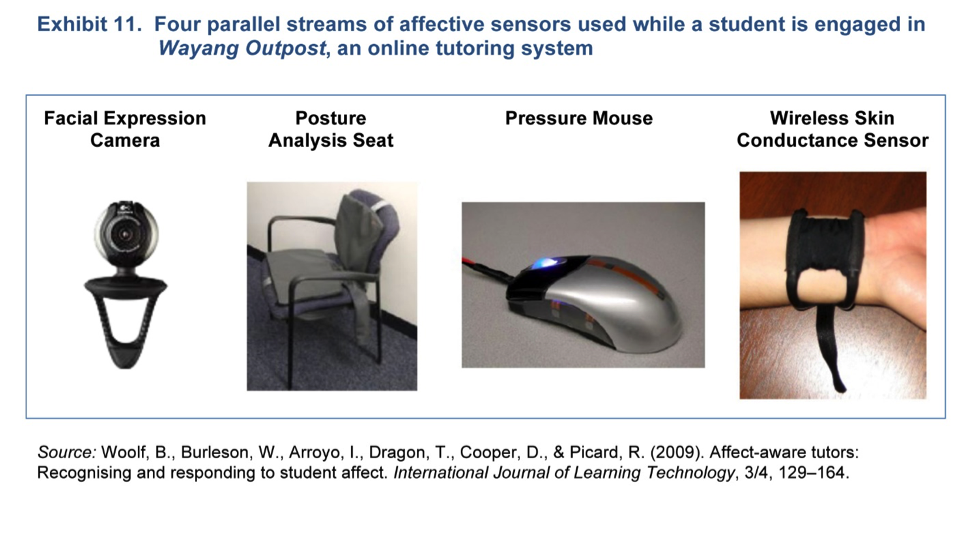 The conspiracy theory was just a knee-jerk reaction to what we nuts saw as a federal takeover of our children’s education and was quickly dispelled by the USDOE who said it was just an idea…just a theory of sorts that wouldn’t come to pass.

Fast forward from a couple years back, in 2013, to today in Encinitas Union School District in California. In 2012 the district issued all students iPads and have been battling the problems that come with those iPads since. Problems such as students accessing inappropriate content, etc.

Constantly changing passwords and making sure that there was a blocking program on the machines so that even when the students are at home the device cannot use their personal router to get into pornography and other inappropriate sites. The district even made parents sign a contract vowing to monitor students’ use of the iPads at home.

Many parents have said that this isn’t enough and wanted a better way to protect the use of the iPads from abuse.

According to the Encinitas Advocate the district is now testing a program called Virtual Keyring.

[How] Virtual Keyring works: The camera on an iPad takes several pictures, compares those with an encrypted image on file and verifies the person. The software continuously monitors to make sure it’s the same person and automatically logs out if authentication fails.

Let me put it in simpler terms. What we have here is called facial recognition biometrics.

But they said it couldn’t or wouldn’t be done! You know…just because something can be done, doesn’t mean it should be done.

At an IUSD board meeting, the district Superintendent, Tim Baird promoted this “single sign in” technology as something that “gets us into that ‘walk through one door’ and you’re into everything.”

Some parents are worried by the sound of that. Baird insisted, however, that this user-friendly technology is only meant to gain access to the system and was not going to track children, even though he admitted to the Encinitas Advocate that Virtual Keyring could be perceived as “Big Brother-ish.”

Look, if it is perceived as “Big Brother-ish” then those with that perception need to join me and other Common Core fighters in line at the Tin Foil Hat shop.

Little by little we’re getting used to these technological advances being put into our schools. It’s all for the protection of the children to make sure they can’t access inappropriate sites on their government issued iPads.

“As long as the government is perceived as working for the benefit of the children the people will happily endure almost any curtailment of liberty and almost any deprivation.” Adolf Hitler, Mein Kampf.

I suppose that goes for “almost any creepy new technology” too.

Which is the Better language, English or French?