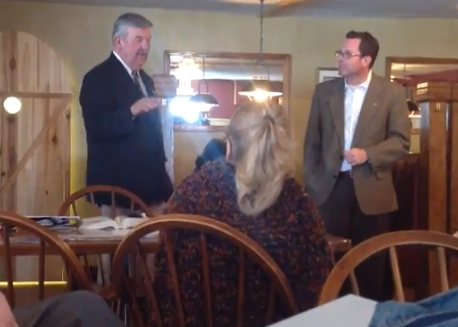 As the race for Colorado GOP State Chair tightens, questionable tactics by incumbent Ryan Call came into play in a county so small that it had gone without a full Republican executive team since 2013. Call is in a tight race as challenger Steve House’s campaign has been picking up momentum with support from both the establishment and liberty wing of the party.

Following a grassroots attempt to reorganize the Costilla County Republican Party, the state GOP refused to recognize the local effort as legitimate. Instead, they planned a new reorganizational meeting where different officers were elected.

The last Costilla County Republican Party Chair and Vice Chair stepped down in 2013, but Carole Naro stayed on as Treasurer until 2014, holding together the remnants of an inactive county party. In February of 2014, after no one expressed interest in taking on the positions of Chair and Vice Chair, Naro closed the County Republican Party bank account and sent the remainder of funds totaling $868.89 to the state party. The State Party considered the closing of the bank account as the dissolution of the County Party.

As of March 2nd, 2015, the Costilla County Clerk and Recorder’s office confirmed 312 active Republicans on their roll along with 82 inactives for total of 396 registered Republicans in the county. An estimated 3500 residents live in Costilla County.

In an effort to resuscitate a Republican infrastructure in Costilla County, Naro contacted former House District 62 candidate Marcy Freeburg for assistance. Freeburg—who is the Secretary for the Huerfano County Republican Party—worked to help Carole organize the first meeting. “Carole Naro contacted me about what she could do about Costilla County. I tried to contact the state party and left a message that was never returned,” Freeburg said. “Prior to and during my run for HD 62 in 2012, I had talked with State Chair Ryan Call about making sure Costilla County had a party during the election but there seemed to be no interest from the state or other residents of the county.”

Because the state party refused to respond to Freeburg’s request for assistance, neither Freeburg nor Naro had access to the state’s list of registered Republicans in Costilla County. With no response from the state, they posted notices in six different locations in the county known to be well frequented and sent emails to the list of active Republicans from Naro’s tenure as Treasurer.

“I told Carole during reorganization time I would guide her through the process that Huerfano County uses and would gladly help in any way I could.” Freeburg stated. “I explained to her that we needed to contact all the folks we could and post notice. I helped her out by giving her a template of the official call letter and emailing all emails she had on record from when she was treasurer.”

Four people attended the February 11th meeting in which Naro was elected chair—only to have that meeting and its elections invalidated under Call’s leadership. Naro has been an outspoken critic of Call and it was anticipated she would vote for House had her election been allowed to stand.

Upon learning of Naro’s attempt to reorganize, the State Party sent out robocalls and letters to the registered Republicans in Costilla County and set a new meeting date for March 1st—which happens to fall outside the state statute which requires these meetings occur between the 1st and 15th day of February. (Neither Naro nor the State Party gave the required 15 day notice according to party bylaws.)

In an open session of the February Republican State Executive Committee Meeting, attorney Marc Zarlengo of Douglas County pled Naro’s case to state leadership, noting that Call refused to allow Naro to participate through a conference call to offer her firsthand account of the notices she sent out preceding the meeting. Zarlengo argued that the bylaws and state law did not necessarily prohibit her as an individual from initiating the reorganization of the County Party, and that it was within the power of the state party to recognize the results of Naro’s meeting instead of calling a new meeting. In email correspondence between Zarlengo and Naro that was provided to Politichicks, Zarlengo wrote, “Chairman Call never did or could explain why he waited until he did to call the March 1 meeting. It simply doesn’t make sense unless he is trying to put his own people in.”

The State Executive Committee determined that Naro did not offer sufficient notice of the organizational meeting she called and did not have the authority to initiate the meeting on behalf of a county party, on behalf of the state GOP, or as an individual Republican in good standing. The committee passed a motion to not ratify the results of Naro’s meeting with an amendment to commend Naro for her initiative to restart the County party. Secretary Lana Fore and Vice Chair spoke out in support of Naro, but could not swing the majority to support what Baisley described as the “organic rebuilding” of the county party. Baisley offered this statement:

“I am incensed at the decision to use the state party process for electing new officers in Costilla County. No doubt, with less than 400 registered Republicans in the county, local party operations have been scarce and unorthodox. And while their processes were imperfect, the Chairman had the authority to confirm their organic officer elections earlier this year. However, the decision to utilize the significant resources and fanfare of the state party with this timing for such a sparse county cannot help but create a cloud of suspicion. The only uncontentious outcome would have been a confirming re-election of the organic officers. Unfortunately, the better part of valor was not chosen for Costilla.”

A new Costilla County organizational meeting was called by the State Party which was held on March 1st at the Silver Sage Steakehouse in Fort Garland, CO—though it was never added to the State GOP Web site’s calendar of events. A lunch buffet was provided at the March 1st meeting, before the start of business. (There were no complimentary food or drinks provided at the original meeting.)

Call opened the meeting with a speech citing inspirational figures such Abraham Lincoln and St. Augustine. A longer impromptu town hall-style Q&A period followed when Senator Crowder was introduced and opened the floor for questions.

When the introductions ended, Call suggested that he be nominated as the “pro tem chair” for the county organizational meeting, refusing to step aside so that a local could lead the meeting under his mentorship. As pro tem Chair, he appointed Karen Garcia, the Democrat County Clerk and Recorder, as the first person to the Teller Committee which is responsible for counting the votes.

Najondine Placek, Deputy Clerk and Recorder of Costilla County who was also in attendance, reported that they did not receive additional compensation for attending the meeting, but that they were there as part of their jobs. Regardless of their attendance, results needed to be certified through the Clerk’s office.

San Luis Valley farmer Ben Christensen won the vote for Costilla County Chair under the guidance of State Chair Ryan Call who emceed the meeting in its entirety.

Local resident Dee Armstrong provided comment on her perspective of the meeting. She said that she arrived with an open mind and was impressed that that no one asked for campaign or party donations. “The process felt open and straightforward, but I felt that did not see the complete picture.” Armstong said. Overall, she said she was pleased with how Call ran the meeting. However, she did note that an explanation of the responsibility of a teller committee was not given, nor were there enough details on the duties and time commitments of each office.

Keith Hershey, Sr, who was elected Vice Chair at the first meeting and later elected Secretary at the State Party approved meeting, described his experience in a phone interview:

“They (the State Party) thought my son was a Democrat and they pulled up information that he was a Democrat out of Pueblo. But he’s been a Republican since he could vote. They were later able to check through the Secretary of State’s office and verify he is a Republican.

We RSVP’d friday. Shana (Colorado GOP Executive Director) called and said they were unable to locate our affiliation from the printout on the state. We used to live here 20 years ago and were registered Republican then. We moved back here in August, registered as Republicans, received mail-in ballots, and voted. If it happened to us, how many other Republicans did it happen to? I doubt that they contacted every registered Republican in the County. My wife is a Republican and she never received notice. It blew me away.

It’s disheartening because we were new and wanted to get involved. We thought it was legitimate with the first posting (for the February meeting). The State never reached out to talk to any of us. I feel like I was betrayed by the State Party.

We didn’t even get an apology for what we went through, but we didn’t suffer like Carol. She’s the one that did all the leg work to try to get this stuff done. You’d think the party would be appreciative of a person doing something. And it’s like they went around trying to find ways to destroy her.”

Robert Spencer: "There Are Ties to the Muslim Brotherhood in the White House."