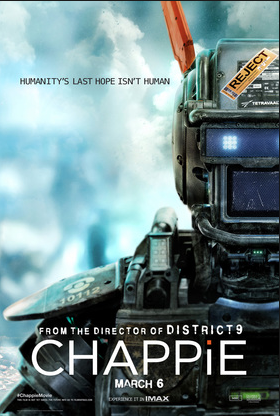 In the near future, the South African government decides to mechanize its police force with robots to combat its high crime rate in Johannesburg. They contract a high tech company, Tetravaal, who install a fearsome robotic police force with great success. Proud at his achievement, the inventor of the robotic force Deon Wilson (played by Dev Patel) approaches the head of Tetravaal (Sigourney Weaver) to install his latest upgrade and make the robots thinking and feeling as well. When his request is denied, Wilson (Patel) steals a destroyed robot and decides to reprogram it with his new consciousness chip. On his way to install the chip, Wilson (Patel) is kidnapped by a South African gang and forced to install his chip to provide the gang with a robot that can be programmed to commit crime for their benefit. With its new thinking and feeling consciousness, “CHAPPiE” the robot, is now taught life lessons by the ruthless gang as well as moral input from his inventor Wilson.

Directed by Neill Blomkamp (“District 9”) and starring Sharlto Copley as CHAPPiE (voice and motion capture) the film was clever, fun and entertaining. I kept waiting for the slap in the face Hollywood moral lesson of all police being evil and corrupt or the gang was forced into their lifestyle due to income inequality, but shockingly, it never happened! CHAPPiE the robot was endearing and charming as he begins his life with the blank slate of a child and soon his innocence changes the behavior of the people surrounding him as well. Dev Patel (“Slumdog Millionaire”), Sigourney Weaver and Hugh Jackman (as the villain with a competing robot) do well in their roles. Yolandi Visser as “Mommy” (a star hip hop artist in South Africa) was engaging and sweet as she softens her demeanor taking care of CHAPPiE.

Although violent and the storyline a bit confusing at times, “CHAPPiE” was a film worth watching for any action sci-fi film fan.