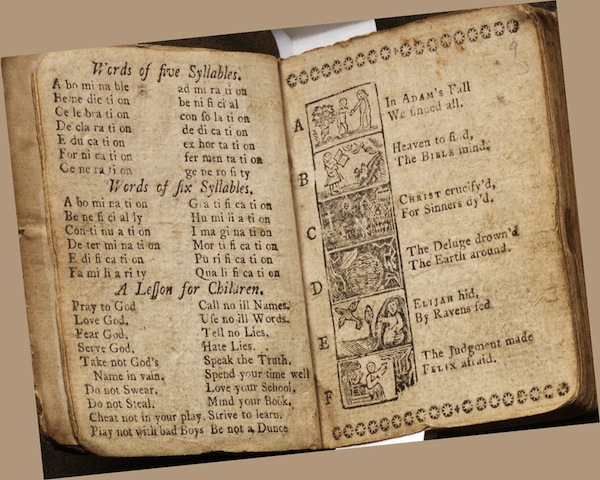 The first textbook ever printed in America was the New England Primer. It was used to teach reading, Bible lessons and morality in our schools until the twentieth century. The Primer is intertwined in American history; the children of our Founding Fathers learned to read from this book as did some of our Founding Fathers according to a book titled, “America’s God and Country Encyclopedia of Quotations” by William J. Federer.

Click to see New Hampshire Public Television’s published online example of the New England Primer as it most likely appeared in 1843—in two columns with illustrations. Note some of the rhymes differ from the original writing in 1692. The oldest extant copy available is dated 1737.

…You can see how many of the rhymes reference biblical themes. The New England Primer was designed to teach children not only their letters, but also religious and moral lessons. The New England Primer was published by many different printers, and the images and rhymes were not the same in all editions. You’ll also notice how three of the rhymes reference death. Only a handful of the rhymes can be considered lighthearted! Death was a very real part of the everyday lives of children. Children in this period lived in a world with no antibiotics or vaccinations for diseases like measles and whooping cough. A simple cut could lead to a fatal infection. In the year this primer was printed, life expectancy for whites was 37 years. The rate for black was 23 years. Many children didn’t survive childhood. The infant mortality rate in 1850 for white children was 216 deaths before age four for every 1000 children born. For black children the rate was 340 deaths for every 1000 births.

The mortality rates’ source NHPTV used is no longer available.

Since this was originally written in two columns and each letter of the alphabet represented its own rhyme, I have left the original spelling, punctuation capitalization and emphases.

A In Adam’s Fall We sinned all.

B Heaven to find The Bible Mind.

D The Deluge drown’d The earth around.

F The judgment made FELIX afraid.

G As runs the Glass Our Life doth pass.

H My Book and Heart Must never part.

M MOSES was he Who Israel’s Host Led thro’ the Sea.

N Noah did view The old world and new.

V VASTHI for Pride Was set aside.

X XERXES did die, And so must I.

Y While youth do chear, Death may be near.

Z ZACCHEUS he Did climb the Tree Our Lord to see.