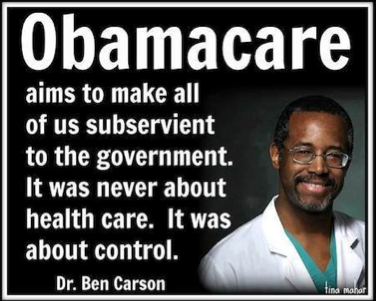 It’s been nearly five years since Obamacare (ACA) was signed into law. Yet, it still remains wildly unpopular, still making it an albatross around Democrats’ necks.

“Americans have never been overly positive toward the ACA, at best showing a roughly equal division between approval and disapproval early on in the law’s implementation. The percentage of Americans who approve of the law represents a new numerical low, which could indicate a loss of faith in the law amid the aftermath of the 2014 midterms.”

Now, as we are just learning, ACA actually costs $50,000 in taxpayer money for every American who gets health insurance. This Stunning figure comes from Congressional Budget Office report that revised cost estimates for the next 10 years. According to the Daily Mail:

And while some Americans have actually seen their premiums go down under Obamacare, others are seeing their premiums increasing as much as 78% (to cover “essential health benefits”).

Many Americans have also lost the health insurance plans they really liked (the insurance coverage the president repeatedly ‘promised’ they could keep), and were forced onto the Obamacare exchanges. Nothing like a government health program that FORCES you to do something, right?

Not to mention the IPAB board (A.KA. “death panel”) deciding what healthcare is best for you and your family, and the egregious mandates that violate your first amendment, and the endless regulations that push independent physicians out of private practice. And, of course, the slew of tax hikes.

Many of us knew from the very beginning that Obamacare had little to do with healthcare, and much more to do with control. This was all part of the “fundamental transformation of America,” after all. A strong centralized government. Of course, as Obamacare architect, Jonathon Gruber, ever so candidly explained, ACA proponents were relying on Americans being ‘too stupid to know’.

Having said all this, the onerous healthcare law may be still actually implode on its own, be repealed, or even be tossed out by the Supreme Court in June.

While most Americans want to see Obamacare repealed, they don’t want to yank newly obtained insurance away from millions of their fellow Americans. That’s why it is critical for Conservatives to advance their winning alternative that alleviates this concern and leads to Obamacare’s ultimate defeat.

There are three main reasons why advancing an alternative is so important: 1. Politically, one can’t expect to beat something with nothing. 2. Policy-wise, our health-care system already needed to be fixed pre-Obamacare, as the government had already broken it, and 3. If Obamacare continues to unravel but Conservatives offer no viable alternative, liberals will seize that opening to push for the government monopoly over American medicine (“single payer”) that they have always desired.

“A winning alternative needs to be something that can be sold to the American people on the political stump, and it must address all three of the Americans’ core goals for real-health-care reform: lowering costs, dealing with pre-existing conditions, and significantly increasing the number of people who are insured versus the pre-Obamacare status quo.

The 2017 Project proposes alternatives such as:

From The 2017 Project:  “Such an alternative would be a huge victory for Americans’ health care, their pocketbooks, and their liberty.”

What Color is the Sky in Obama's World?