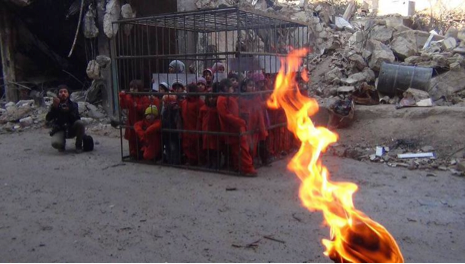 Enough is beyond enough with these barbaric animals. President Obama and his weak-handed approach to dealing with ISIS cannot be the last measure. There should not be one grain of sand, one rock, cave, hut, or tent that one of these ISIS thugs can hope to find refuge. An immediate campaign to completely and without reservation, extinguish this menace from the face of the Earth should begin without further delay.

An attitude of take no prisoners is the only acceptable approach to dealing with this scourge to humanity. There are simply not enough words or clichés to adequately relay the depth of contempt that should be felt by all towards these Islamic Terrorist. No more politically correct excuses, no more failing to call a spade a spade. Kill every last one of them and anyone who harbors these vile creatures.

The photo above was taken by a group of Syrians protesting the violence committed by Syria’s President Bashar al-Assad. In the photo, children are dressed in the orange prison garb that has come to signify the ISIS terrorist group’s victims of execution. The protesters claim that al-Assad and his supporters are just as deadly as the ISIS terror group. While it is not an actual photo of ISIS child prisoners, it is no less a warning of what is likely to come.

The heinous execution of journalist and more recently, the Jordanian pilot, demonstrate the utter disregard for human life displayed by ISIS terrorist. To imagine that they would not resort to the kind of vileness depicted above is to be naïve. Other stories circulating on respected sites like Front Page Magazine and Robert Spencer’s Jihad Watch have been documenting stories of ISIS selling children as young as 12 months of age for sex.

It has also been proven that these maniacs have no hesitations about beheading individuals or beheading groups as they just did with Coptic Christians. ISIS thugs have no qualms about slaughtering unarmed men, women, and children. Video after video has shown the ruthless nature of this group and all who aid them with even tacit support. There can be no excuse or exception made for the existence of this organization.

The time to pander to political correctness or fears of another protracted conflict have passed. Sending MRE’s and advisors to deal with a murderous association is not enough. The United States should use the vast air power at our disposal and support the surrounding nations like Jordan and Egypt. Jordanian troops and Egyptian troops can be assisted financially with hunting down and eradicating this plague.

Nations in Europe can participate as they are best known to do…no military support but at least pass legislation within the EU to halt the return of ISIS soldiers to Europe. These men and women should be stopped before they step foot on European soil. Anyone found to have fought or aided ISIS/IL should be subject to a mandatory life sentence. It would be too much to hope that Europeans would be enlightened enough to seek the death penalty.

The photo above is not yet a reality for child prisoners of ISIS. However, thinking that such an act is beyond their murderous designs is foolish. If such a photo can spur people into action and create the type of blood boiling response necessary to bring about the destruction of ISIS/IL, then let it be broadcast far and wide. Again, this photo is not from ISIS/IL but why wait until they implement such an act before responding? A proactive approach would mean destroying this group before such a reality could be created.

Obama and the Muslim Brotherhood