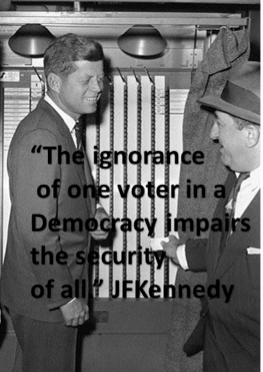 The United States of America is home to the oldest political party in the world. Democrats have been around since the 1790’s when they realized the new Republic could best be organized by attaching political policy to public opinion. Though the Republican Party is younger than the Democrats, it is one of the two major parties in the United States.

In the beginning, political parties controlled much of the Election Day activities, and that included the ballots. Ballots were handed to individuals with the party candidates already filled in and so it was not very democratic in nature. Party leaders even colored their ballots or designed them in particular shapes to watch on Election Day who voted for which party. Thanks to the Australian concept of the “secret ballot” Americans caught on to this idea and in 1892, Grover Cleveland became the first U.S. President to be elected completely by secret ballot.

Still, problems and complaints about the U.S. voting system continue. Some argue that the Straight Party Ticket or the Straight Ticket Vote (STV) is an extension of early forms of voter control. In this case, STV means that voters simply click one box to elect all the members of a single party. For example, in the state of South Carolina it is possible to vote a straight party ticket and vote for only members of the party selected. So, a voter can select Republican, and that one tick will then check all the boxes beside the names of GOP candidates. The same is true for those who wish to select the Democrat ticket.

Currently, there are 10 states that still have STV ballot options but that number may soon drop to 9. Indiana has just introduced a bill to remove the STV option from their state’s ballot. The argument is that too many voters simply check one party or the other without knowing if any of the individual candidates are qualified or fit for office. By removing the STV option, proponents argue it will force voters to become informed about the candidates running for office.

Opponents of the removal of the STV argue that this is an attempt to prevent a party from winning. For example, in the state of Texas the STV ballot was voted down in 2012 but later reinstated. The Democrats had 23% of all STV ballots and the GOP had 18% of the STV ballots, however, the GOP still won the majority of the elections, including the governorship. Democrats argued the removal of STV ballots was an attempt to prevent their party from winning elections.

The remaining 10 states with STV ballot options are: Alabama, Indiana (bill pending), Iowa, Kentucky, Michigan, Oklahoma, Pennsylvania, South Carolina, Texas, Utah, and West Virginia. While these are the only states to still allow STV ballots, it is likely they will soon opt out of this ballot selection. Whether it will lead to more informed voters remains to be seen. Perhaps what really needs to be removed is not the STV ballot but rather Political Parties.

In his farewell address, September 17, 1796, President George Washington had this to say about political parties:

“However [political parties] may now and then answer popular ends, they are likely in the course of time and things, to become potent engines, by which cunning, ambitious, and unprincipled men will be enabled to subvert the power of the people and to usurp for themselves the reins of government, destroying afterwards the very engines which have lifted them to unjust dominion.”