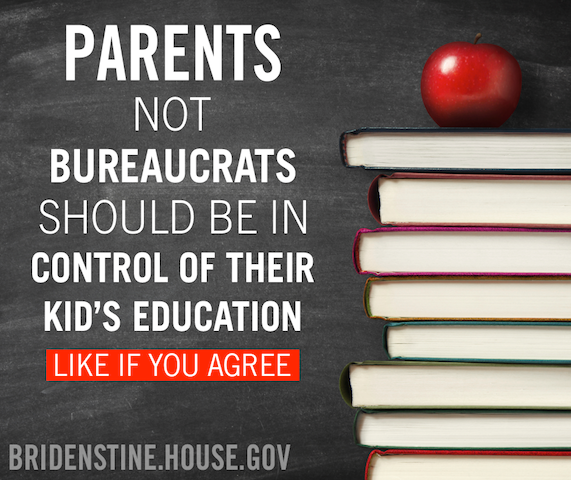 Why should we abolish the U.S. Department of Education?

Federal means “from the states.” The power the Federal Government has is granted by the states, and it is up to the states to stop this bulldozer. South Dakota is leading the way here, and the rest of the states should join in. The state legislators are the ones with the power given by the Constitution, except for the few enumerated powers.

The Federal government is never going to stop itself. It is never going to stop feeding itself or spending us into oblivion, and it will never reign in its own power. It must be the State legislators that stop it. They hold the reigns. The power lies within the states if the state legislators will only recognize it and take it back. It may be up to We the People to inform them.

Federal Education is the best place to start. While it would be great to shut down the illegal, life-sucking IRS, the fallout from that is going to be great, and it is much more complicated. Federal Education should be simple. States stop sending Feds education money; Feds no longer pull strings attached to the money when they bequeath it back. States have more education dollars to spend, and fewer mandates to wrangle. More education; less bureaucracy.

If the states instruct Congress to abolish the IRS, as South Dakota has so beautifully done here, we might just not fall off the cliff. We could stop this path of destructive education that will leave our children indoctrinated into something we do not recognize. We might be able to leave something for our children to inherit besides debt and destruction. We might, just might, not destroy our Republic.

The text of the bill from the South Dakota legislators to abolish the Dept. of Education is included in Shane Vander Hart’s article from Truth in Education: http://truthinamericaneducation.com/education-at-state-level/south-dakota-house-abolish-u-s-dept-education/

I would highly recommend that every reader send this article to your State Representative and State Senator.

The United States is a union of state governments, and was never intended to be this mammoth government that is run from afar. We must flip our thinking from the next U.S. election and start focusing on our 50 separate States as our main government, individually, and make certain we are sending the best and the brightest to our State House and Senate. Know who your State Representative and your State Senator is. In Oklahoma, the website is okhouse.gov, and most states have a similar website.  It is easy to find. Get involved.

Virginia Family Farm Under Assault Under Guise of "Enforcement"