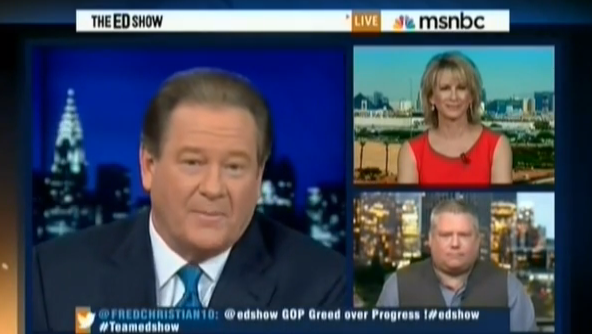 Small business owner and podcast radio host Lou Desmond and his wife were among the millions affected by Obama Care, when their longtime insurance policy was cancelled in August of 2013. In addition, the highly sought-after medical group that Desmond’s family had used for years dropped them due to the shrinking reimbursements from their insurer.   Prior to Obama Care, Desmond’s family had an insurance plan they were happy with, and now find themselves in the same boat with millions of Americans.

“What was the mantra?” asks Desmond. “If you like your doctor, you can keep your doctor. That was a lie. If you’re a business owner, you got completely screwed by Obama Care. It’s a wealth transfer – taking money from people like me and paying for insurance for others who can’t afford it. We have had four other insurance plans that we would be on for 45-60 days, and then we would get cancelled.”

Desmond, who appeared on MSNBC’s Ed Schultz show February 12, Schultz talks about the merits of Obama Care and rants about the Republicans in Congress who want to repeal the law.

“They’ve been ripping apart ObamaCare, but they’ve got nothing on the table. Lou, is it too much to expect that maybe we would see them follow up on what they’ve been complaining about?” Schultz asks.

“I can speak from my experience. And as a small business owner, as a person who runs his own business, my health care has been terribly affected.  We’re on our third or fourth policy still trying to find it. People like me that self-insure have been nothing but hurt by Obama Care.”

Clip of the Ed Schultz interview can be seen here:

Lou Desmond  is currently doing a podcast called the Lou Desmond and company Show on IEBusinessDaily.com.  He previously had a radio show on AM 590.

Does Gov. Haley Want People to Stay "Dumb & Poor" by Refusing to Fund SC State U?