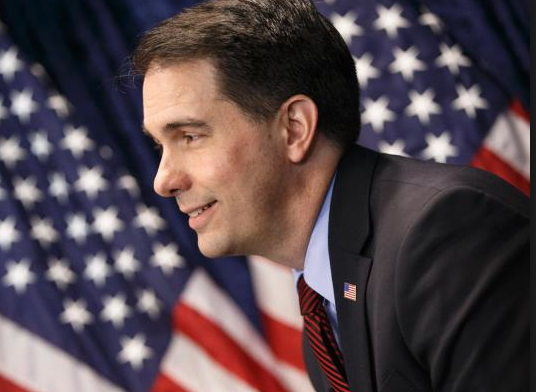 By now you have surely heard that the Governor of Wisconsin, Scott Walker (R), the man who has won his Wisconsin Governorship over . . . and over . . . and over again, dropped out in his final year at Marquette University in Milwaukee.  The radical extremists in the Democratic Party are horrified! As well they should be! This slacker, who has begun a run for president of the United States, has now joined the shameful ranks of the freeloading billionaire drop-outs that include Bill Gates, co-founder of Microsoft; Paul Allen, co-founder of Microsoft and owner of Seattle Seahawks , Steve Jobs, founder of Apple; Mark Zuckerberg, founder of Facebook; Larry Ellison, the founder of Oracle; Michael Dell, founder and CEO of Dell Inc.; Ralph Lauren, American fashion designer; Ty Warner, Chicago billionaire who created Beanie Babies; Jack Taylor, founder of Enterprise Rent-a-Car; Sheldon Gary Adelson, chairman and CEO of the Las Vegas Sands Corporation, the parent company of Venetian Hotel; Donald Newhouse, who works in the publishing industry; David Geffen, music producer and founder of Asylum Records; Dean Kamen, businessperson, entrepreneur, inventor, engineer; Ted Turner, founder of CNN and TNT; Micky Arison, owner of the NBA’s Miami Heat and CEO of Carnival Corporation; Howard Hughes, an American business magnate, investor, aviator, aerospace engineer, film maker and philanthropist; and Frank Lloyd Wright, architect.

These same Democrat radical extremists chide the high school dropouts noting that because they haven’t a diploma, there is absolutely no hope of achieving the American dream—in spite of Business Insider’s research that did find a few dropouts who did okay: Richard Branson, CEO of Virgin, an international powerhouse worth $4.6 billion; David Karp founder of Tumblr, selling it to blog-hosting company to Yahoo for $1.1 billion; Kirk Kerkorian, previous MGM owner and Las Vegas real estate Casino magnate; George Foreman, boxing two-time World Heavyweight Champion, Olympic gold medalist and spokesperson for the George Foreman Grill; Carl Henry Lindner, Jr., founder of American Financial and CEO of the Cincinnati Reds; and Vidal Sassoon, who was once paid $5,000 for a new hair style by a movie star.

If Governor Scott Walker was to be elected president, he would not be alone in what the Democrat Party’s radical extremists members consider under-educated.   The former U.S. presidents who, according to the liberal Left’s present day standards would not be qualified to hold the office, include: George Washington; Andrew Jackson; Martin Van Buren; William Henry Harrison; Zachary Taylor; Millard Fillmore; Abraham Lincoln; Andrew Johnson; Grover Cleveland; William McKinley; Harry S. Truman and Lyndon B. Johnson.

Ivy League Harvard College gave us President Obama who has escalated the debt to nearly 18 trillion dollars from $10.6 trillion. The nation presently suffers double digit unemployment according to the Unite Stated Bureau of Labor Statistics, which rose from about 4.5% under Bush before the crisis. President Obama is also the catalyst of the illegal immigration invasion we are suffering today.

Then we have Yale College to thank for President Bill Clinton’s administration who pressured banks to “further encourage” mortgage loans so “every” American could be a homeowner, whether they could afford it or not—which resulted in the worse financial loss since the great depression. Of course, to be thorough, we should also reflect upon the moral issues of Bill Clinton’s term as well as his impeachment by the House of Representatives on two charges. One charge was of perjury and the other of obstruction of justice regarding his affair with an intern.

However, the Democratic radical extremists think that we should not be distracted by Governor Scott Walker’s character displayed in his superb record, as reported by National Review, which,

“. . . include transforming [Jim} Doyle’s [former Wisconsin Governor] $3.6 billion deficit into a $911 million surplus. Walker did this without hiking taxes, as Doyle did. Instead, Walker cut levies by $2.2 billion. This helped stimulate Wisconsin’s economy, lower the unemployment rate on his watch from 7.7 percent to 5.5 percent, and increase per capita income from $38,755 to $43,149. No wonder the share of Wisconsin employers who believe the state is on the right track has soared from 9 percent to 95 percent.”

Most shameful though, as uncovered by Megan McArdle, an economics and business columnist for Bloomberg View, was his D– in French. When Rosette Stone hears of it, surely there will be a rocketing rebuke!

The Great and the Good: Bibi Goes To Washington