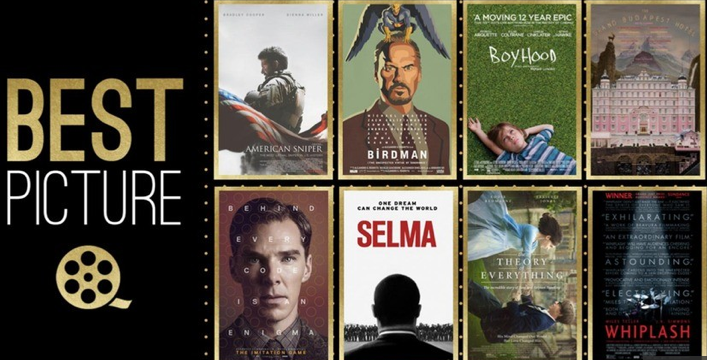 Having recently reviewed the history-making film, “American Sniper” (5 out of 5 Stars), I thought a review and quick overview of the 2015 Oscar Best Picture nominees might be helpful for anyone who has not seen them.  Here they are.

BIRDMAN:  Four out of Five Stars

Micheal Keaton stars in this dark comedy about a former Hollywood superhero (“Birdman”) trying to launch a Broadway production to revitalize his career. Throughout the film, Riggan (Micheal Keaton) engages in levitation, telekinesis and conversations with his famed character as he struggles with mounting the production and resolving relationships from his past. Keaton is compelling in his performance and the cinematography and direction is artistic and gripping as we follow the story wondering if what we are seeing is real or imaginary. Excellent performances as well from Edward Norton (Mike) and Naomi Watts (Lesley) in this deeply cynical yet thought provoking film.

THE IMITATION GAME:  Four out of Five Stars

Germany’s World War II Enigma machine’s unbreakable codes are costing England the war and thousands of lives. Alan Turing (actor Benedict Cumberbatch) along with a group of scholars, linguists, chess champions and intelligence officers are brought together to crack the code and through the brilliance of Turing, eventually do. The story highly focuses on Alan Turing’s homosexuality with strong reference to his genius and contribution to modern day computing. Cumberbatch (Turing) is clever in his performance and Keira Knightley (as code-breaker Joan Clark) stands out as well.

THE THEORY OF EVERYTHING:  Three out of Five Stars

Based on the memoir of wife Jane Hawkins, “The Theory of Everything” focuses on the personal life of Stephen Hawkins. From his diagnosis of motor neuron disease and early marriage throughout his career till his eventual divorce, the storyline barely touches on his brilliance as a world famous physicist. Eddie Redmayne is excellent in his performance of Hawkins through his physical challenges and certainly makes the film worthwhile. However if you were looking for a science film based on Hawkins theories, and not a biographical film based on his personal life, this is not the film to see.

BOYHOOD:  Two out of Five Stars

“Boyhood” is a fictional story following the life of a boy from age six in 2002, to his entry into college in 2013. We follow his mother (Patricia Arquette as Olivia Evans) as a single parent through several abusive relationships (Evan Hawke portrays Mason Evans Sr.) while her children (Ellar Coltrane as Mason Evans Jr. and Lorelei Linklater as Samantha) struggle to adapt. The film is unique in as that we see the two children physical grow up on camera and the performances of Arquette and Hawke are unique (considering the time span) and at times interesting. If you’re into reality television, “Boyhood” might be your cup of tea.

SELMA:  Four out of Five Stars

Based on Martin Luther King’s 1965 march from Selma to Montgomery, Alabama to secure black voting rights, “Selma” is accomplished yet lacking in vivid performances. David Oyelowo is good in his interpretation of MLK although performances of Tom Wilkinson as LBJ and Tim Roth as George Wallace are lackluster if not inaccurate. Oprah Winfrey is fair in her performance of Annie Lee Cooper. However those who are not familiar with the great accomplishment and dynamic personality of Martin Luther King may be inspired to see actual footage of the reverend and the march (some of which is included in this film) for comparison. Although “Selma” is compelling, in my opinion, it does not capture the brilliance, compassion and heroism of Dr. King and his message.

THE GRAND BUDAPEST HOTEL:  Five out of Five Stars

Director Les Anderson has magnificently brought to life this fictional story (inspired by the writings of Stefan Zureig) of the adventures of a hotel concierge and his trusted lobby boy as they try to secure a priceless painting. The story takes place between the two World Wars in the fictional “Republic of Zubrowka” at The Grand Budapest Hotel and is perfection from beginning to end. Ralph Fiennes as Gustave and Tony Revolori as Zero are brilliant in their performances as well as the rest of the cast including Adrien Brody, William Dafoe, F. Murray Abrahams and Jeff Goldblum. Highly stylized, fast paced and beautifully filmed, “The Grand Budapest Hotel” is a treasure to see and to American film.

WHIPLASH:  Four out of Five Stars

Damien Chazelle has directed this intense, well-acted story of a young drummer who enrolls at a music conservatory and is bullied by a ruthless instructor whose method is to tear apart his students to gain perfection. Miles Teller as Andrew and J K Simmons as Fletcher are masterful in their performance and a classic for on film relationships. “Whiplash” is a dark film into a jazz musicians world and will rattle the nerves of viewers, but delivers great performances.

The 2015 Academy Awards will be broadcast from ABC on February 22.