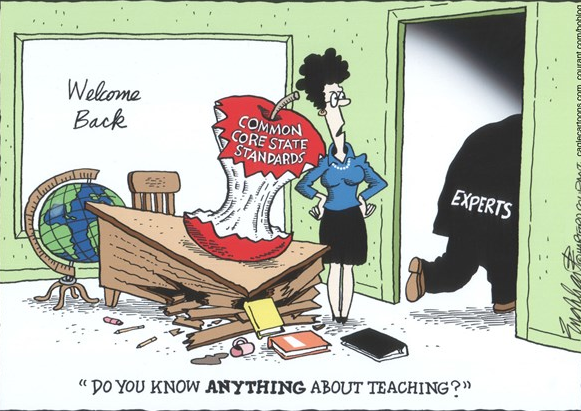 Oregon is joining ranks with the countless other states who have decided to take a stand against Common Core.

I honestly never thought I would be able to write that. I am pleased and definitely support the bill, HB2835. That has a nice ring to it, wouldn’t you say?  I do have some qualifications to my support because although it is a step forward, I still would like to see a bigger step. I would like to see a bill that has more teeth to it, to use a phrase often repeated when talking about a Common Core repeal bill that would completely obliterate it.

Here is the main gist and important language:

It does in fact repeal repeal section 17, chapter 37, which was made Oregon Law in 2012, regarding Common Core State Standards.

The teeny little problem that is niggling in the back of my brain is the rest of the bill’s wording. Say that a district did decide to drop the Common Core and the SBAC. The rest of the bill’s wording basically makes it so that even though, technically, the district would be out of Common Core, it would still be controlled by the Chief Education Officer and the Oregon Education Investment Board. Both of those things are controlled by the governor who loves the Common Core. Oh, and let’s not forget that Oregon’s governor appointed himself as State Superintendent.

Anything that doesn’t come out with completely closing down the OEIB and returning to an elected State School Board and Super is not quite up to par for me.

The language means that even though we wouldn’t be doing Common Core, per se, we would still be on the fast track to following the same sort of education reforms that lead to the WIOA (Workforce Innovation and Opportunity Act, passed by congress in 2014).

This is where we gear all of our education in K-12 to the “school to work” model. The failed model of the 90s.

Here’s the deal. I am sort of disheartened by the bill’s weakness. However, I am also extremely grateful to the representative who put this forward. Representative Carl Wilson, newly elected in November has worked on drafting and putting forward this bill.

We also cannot forget that this is Oregon. There is no way that a bill with bigger teeth would have any chance of even getting out of committee. Baby steps. Baby steps to victory.

So, kudos to the man behind the bill. He ran on the platform of repealing Common Core and that is the first thing he is working on doing. We offer him our full support and any help he may need.

I also want to express my deep gratitude to Lisa Crume, our partner in Southern Oregon, whom paved the way for this. Without her help I am certain this could never have been accomplished.