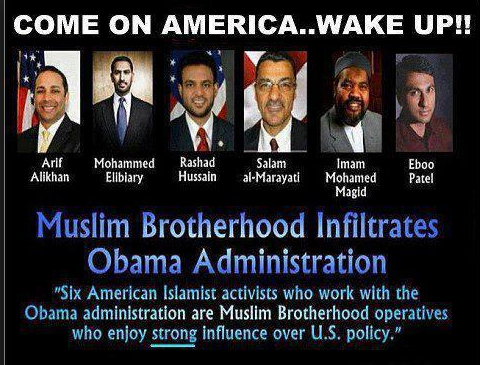 Is Obama connected to the Muslim Brotherhood and should Americans be concerned? Is the United States catering to Brotherhood under Obama? Are we inviting Sharia law into the country? Where is Obama taking the United States? These are valid questions we should all be asking ourselves.

Obama has six very questionable members in his administration:

Arif Alikhan – Assistant Secretary for Policy Development for the U.S. Department of Homeland Security. Arif Alikhan was Deputy Mayor for Los Angeles. During his tenure, Alikhan was in charge of public safety for Los Angeles. At that time the LA Police Department had a plan to monitor Muslim communities and the more radical mosques in the area. Despite the fact that many local residents of the Muslim community supported the 9/11 hijackers, Alikhan dismantled the monitoring program. He has even called Hezbollah a “liberation movement” and criticized George W. Bush for his war on Islamic terror.

Mohammed Elibiary – Homeland Security Adviser.  According to JihadWatch.org, “Elibiary admits he’s a longtime friend of a self-described Islamist (Shukri Abu Baker) convicted in 2008 of financing the terrorist organization Hamas through his U.S. Muslim Brotherhood entity, the Holy Land Foundation. Elibiary reveals that he donated to the Holy Land Foundation monthly until it was shut down by the U.S. government and he defends Baker, depicting his prosecution as a case of political persecution.Rashad Hussain – Special Envoy to the (OIC) Organization of the Islamic Conference.”

Salam al-Marayati – Obama Adviser, founder of Muslim Public Affairs Council and its current executive director. After he was appointed, Robert Spencer of JihadWatch.org asked, “What does Salam al-Marayati, who blamed Israel for 9/11 and defends the jihad terrorists Hamas and Hizballah, and is one of the most arrogant of Islamic supremacists in a field crowded with contenders, know about human rights?”

Imam Mohamed Magid – Obama’s Sharia Czar, Islamic Society of North America.  From IsraelNationalNews.com:  “Magid heads ISNA, which was founded by Brotherhood members, was appointed by Obama in 2011 as an adviser to the Department of Homeland Security. The magazine says that has also given speeches and conferences on American Middle East policy at the State Department and offered advice to the FBI.”

Eboo Patel – Advisory Council on Faith-Based Neighborhood Partnerships.  Again from IsraelNationalNews.com, “Patel maintains a close relationship with Hani Ramadan, the grandson of Brotherhood founder Hasan al-Banna, and is a member of the Muslim Students Association, which it identifies as ‘a large Brotherhood organization.'”

So who are the Muslim Brotherhood, and are they dangerous to the United States?

The Muslim Brotherhood was founded in 1928, and has faced a few problems here and there through the years. However, they’re patient and their ultimate goal is to instill Sharia law into all aspects of the civilized world, commanding that all areas of life fall under Islamic law.

The Brotherhood strongly supports Islamic Jihad – their holy war against everyone who is against Islam. We have seen their Jihad increase exponentially the last few months and the people who practice it are a threat to civilization. Jihad ensures that Islamic law is put in place, using any and every means necessary.

The way they blend in with society is by appearing as pleasant and congenial individuals. As a group, the Brotherhood lives quietly and peacefully in the community. They slowly infiltrate local government as the opportunity arises, changing the organization/community from the inside and not the outside.

The Islamic creed allows Taqiyya (deception) in order to promote their cause among non-Muslims.

In other words, they can lie to achieve their goals.

The main difference between the Brotherhood and other terrorist organizations is merely their strategy; Islamist terrorists attack full throttle, while the Brotherhood’s plan is to take over more subtly, stealth-like.

The Investigative Project on Terrorism reports on terrorists and Islamic groups. The following is an excerpt from a memo by Mohamed Akram in 1991 to the Shura Council of the Muslim Brotherhood:

The process of settlement is a “Civilization-Jihadist Proecess” with all the word means. The Ikhwan must understand that their work in America is a kind of grand Jihad in eliminating and destroying the Western civilization from within and “sabotaging” its miserable house by their hands and the hands of the believers so that it is eliminated and God’s religion is made victorious over all other religions. Without this level of understanding, we are not up to this challenge and have not prepared ourselves for Jihad yet. It is a Muslim’s destiny to perform Jihad and work wherever he is and wherever he lands until the final hour comes, and there is no escape from that destiny except for those who chose to slack. But, would the slackers and the Mujahedeen be equal

Americans should not be afraid, but we should aware of what the Muslim Brotherhood is about. We should be prepared to fight for the freedom and the constitution of the United States of America for future generations.

Is It Time to Declare Open Season on ISIS?

Data Collection on Students Alive and Well in Oklahoma & the Rest of the U.S.‏