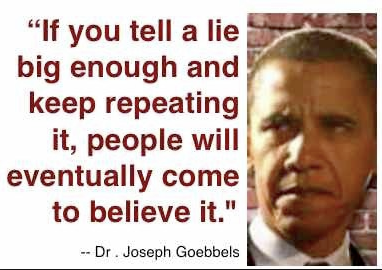 “Only the mob and the elite can be attracted by the momentum of totalitarianism itself. The masses have to be won by propaganda.”—Hannah Arendt, The Origins of Totalitarianism, 1951

Few Americans were deceived during President Obama’s State of the Union address as he espoused that his policies are working and that America‘s economy has recovered from the Democrat driven mortgage crisis of 2007.

Now one expert is speaking out about the use of misleading indicators, in particular the unemployment numbers and economic recovery being reported.

“There’s no other way to say this. The official unemployment rate, which cruelly overlooks the suffering of the long-term and often permanently unemployed as well as the depressingly underemployed, amounts to a Big Lie.”

The real December unemployment rate is said to be 11.6%.

Clifton points out that the government uses a compiled set of numbers in one category to measure labor while omitting another category all together, which would give the American public a more accurate picture. He explains that the U-3 numbers are considered the “official unemployment rate” since they represent unemployed workers who are actively searching for new jobs.

The U-6 category not reported includes all of the groupings: total unemployed, the discouraged workers and the marginally attached, as well as the part-time workers who can’t find full time work. The more people who drop out of the workforce, the better the U-3 number looks.

By only reporting the U-3 numbers, it appears that unemployment is 5.6%; President Obama and his administration are using that number as evidence that the American economy is in recovery when it is not.

The U-5 category, not mentioned by Clifton or media, is also compiled by the by the US Bureau of Labor of Statistics, includes the total of unemployed and discouraged workers who have dropped out of the work force as well as those “other persons marginally attached to the labor force.” Because they did not actively search for employment within the prior 4 weeks, they are not counted as unemployed.

Clifton, on the Fox’s American Newsroom states that the unemployment number “is getting messy” and that “it might be the most important number in America and the world” because it indicates how many people are working.

Clifton points out that the number mixes both part time and full time, making it deceptive in judging the job market. The number of full time jobs as a percentage of the total population is the lowest it’s ever been. America lost 13 million jobs during the recession, and we’ve only recovered 3 million. President Obama, Wall St. and the media are claiming that this administration has had more success with unemployment than we’ve had in this nation in the past 10 years. Clifton says, “That is not true.” In fact, he states, “The full time jobs are the worst they’ve been in 30 years.”

Fox posted these statistics during the American Newsroom interview between Bill Hemmer and Jim Clifton:

To “fix America” over night, Clifton says we need over 10 million good jobs—not the kind of jobs presently available.

The most reliable place to find new jobs are in new business start-ups, which is at its lowest in 20 years. American start-ups are referred to as the “birth and death” rate. We need around 500,000 new business births because 400,000 will die. Clifton points out that 4 years ago, “those lines crossed” and that unless the spirit of entrepreneurship and free enterprise is revived, our economy will not rebound.