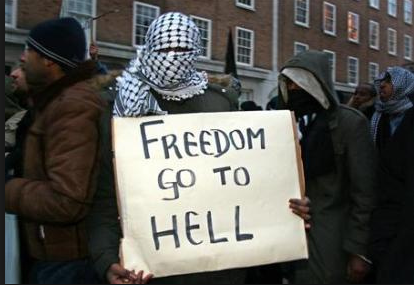 First myth used to justify that Muslims become radicalized because we insult their prophet Muhammad.

Under Sharia Law we are not allowed to “defame” Islam or its prophet or question the teachings of Muhammad or Islam (sûrah 2:108). Never mind the fact that Islam defames the Lord Jesus Christ by demeaning Him to the status of a Muslim prophet second to Muhammad. Never mind the fact that the Qur’an teaches that if we believe Jesus is the Son of God—and, therefore, God—as Christians we are condemned to the fires of Hell.

And they set up equals [Jesus and Mary] with Allah that they may lead (people) astray from His path. Say: Enjoy yourselves, for surely your return is to the fire (Sûrah 14:30, bracketed clarification mine).

Do the disbelievers reckon that they can choose My bondmen [Jesus and Mary] as protecting friends beside Me? Lo! We have prepared Hell as a welcome for the disbelievers (Sûrah 18: 102, bracketed clarification mine).

Because Jesus stated in John 9:35(some versions of the Bible translate the Greek Theos [God] as Son) and in John 10:36 that He is the Son of God, the Qur’an condemns Jesus Himself to Hell:

If any of them should say, “I [Jesus or Mary] am a god besides Him” [Allah], such a one We should reward with Hell: thus do We reward those who do wrong” (Sûrah 21:2, bracketed clarification mine).

For those of you who might ask why we inserted Mary with Jesus as “associates” with Allah instead of the Holy Spirit, it is because of the Qur’an’s misinterpretation of the Holy Trinity—a mistake the God of the Bible would never make.

Here is the actual Quranic understanding of the Trinity as found in sûrah 5:116, where Allah puts words into the mouth of Jesus by having Him deny He and His mother are God’s associates with Allah. The truth is the Qur’an is right as far as it goes, because Jesus is not the Son of Allah—He is the Son of YAWA—and the third person of the Trinity is not a human named Mary, but God the Holy Spirit.

And behold! Allah will say: “O Jesus the son of Mary! Didst thou say unto men, worship me and my mother as gods in derogation of Allah?” He will say: “Glory to Thee! never could I say what I had no right (to say). Had I said such a thing, thou wouldst indeed have known it. Thou knowest what is in my heart, Thou I know not what is in Thine. For Thou knowest in full all that is hidden” (Sûrah 5:116).

Offenses in the Qur’an are not limited to just Christians. If you are a Jew—according to the Qur’an—you are descended from pigs and apes:

Shall I point out to you something much worse than this (as judged) by the treatment it received from Allah? those who incurred the curse of Allah and His wrath, those of whom some He transformed into apes and swine, those who worshipped evil;—these are (many times) worse in rank, and far more astray from the even path! (Sûrah 2:65).

And ye know of those of you who broke the Sabbath, how We said unto them: Be ye apes, despised and hated! (Sûrah 5:60).

In another passage the Qur’an states, “And ye know of those of you who broke the Sabbath, how We said unto them: Be ye apes, despised and hated! (Sûrah 2:65).”

The insult to Muslims by a simple drawing of the prophet Muhammad pales in comparison to the Islamic bloody attacks and insults to the Christian God and disparaging portrayals of Jews by Muhammad and the Qur’an.

Second myth used to justify Muslims killing innocent people are extremists who do not reflect the teachings or examples of Muhammad.

We are told that Islam is a religion of peace, that it has been hijacked by “extremists,” yet when one looks over the history of Islam, we see wars and killings in the name of Allah and his prophet Muhammad. It seems apparent our politicians and media outlets believe if they keep marginalizing those faithful Muslims who are guilty of nothing more than following the dictates of Muhammad and the teachings of the Qur’an, they will somehow repent of their obedience to Islam—which literally means “submission”—and reject over 1,400 years of obedience to the teachings of Muhammad and the Quran by accepting a watered down (apostate) version of Islam.

We have become so politically correct that we have literally redefined the meanings of common everyday terms and allegorized not only our Holy Bible, but the Constitution of the United States of America as well. Now we naïvely believe that by claiming Islam is a religion of peace—hijacked by some rogue elements—will make it so. Even the Pope has watered down the gospel message of Jesus’ words, “I am the way the truth and the life. No one comes to the Father but by me” (John 14:6) and declares that even atheists who discount the existence of any god—if they are good—will go to Heaven. I am at a loss to explain what part of ‘NO one” the Pope doesn’t understand, but that’s an issue for another time.

The truth is that Islamists are not so easily duped as some Christians are in rejecting the major teachings of their faith. Islam literally means “submit;” therefore, Islam by its very nature is a strict religion. In Islam there are only three options: (1) You either convert, (2) die or (3) become reduced to a second rate citizen who has to pay blood money in the form of a tax called the Jizya.

Consider: Who are the radical Islamists hijacking a great religion?

Recently the world witnessed Taliban gunmen storming a school in Pakistan killing at least 141 people. Over a period of nine hours, these Islamists methodically shot innocent school children in the head. Almost immediately the world recoiled with condemnation of those “radical Islamists” who hijacked one of the world’s great religions of peace. Radical? Hijacked the Muslim faith? Really?

The Islamist terrorists were simply imitating their role model, the greatest prophet of Islam, Muhammad. According to Ibn Ishaq in his book “Life of Muhammad”— under the guise that the Jews of Yathrib aided his Meccan enemies—Muhammad rounded up approximately 800 Jewish men and boys (some historians put the figure at 900) and began beheading them one by one. This bloody work took all day and into the evening (not unlike the recent event at the Pakistani school).

So who are the radical Islamists? They are the so-called moderate Muslims who stray from the fundamental teachings of their faith and prophet in order to go along to get along. Consider that these moderate Muslims might simply be deceiving us until Muslims out number their neighbors and become strong enough to overtake their host country and establish Sharia Law and thereby establish an Islamic state. The Qur’an teaches that through deception outnumbered Muslims are allowed to “lie low” and be accommodating until they are strong enough to further the cause of Islam (Sûrah 66:2). That’s a radical idea!

Common Core: Opt Out & Rewriting NCLB Might Shoot Us In the Foot