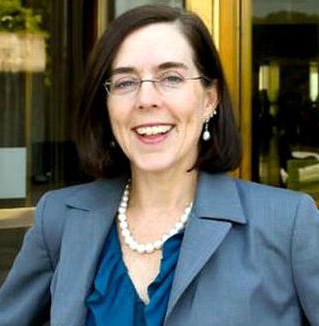 Kate Brown has been involved in Oregon politics for 20 years. She started in 1991 when she was appointed to the state legislature. One year later she faced stiff opposition from her opponent where she was outspent and out-endorsed. Brown knocked on as many doors as she could and after a re-count she won by merely 7 votes.

In 1998 she became the first woman to be named Majority Leader of Oregon’s Senate.

Brown is supported heavily by the unions and has made many enemies on her way up the ladder. Shady tactics such as outlined here in the Washington Post has not earned her many friends:

As the top fundraiser for Senate Democrats, she enjoyed close relationships with powerful labor unions who helped her party take back the majority. But she angered some of her fellow members by whipping votes in favor of cuts to the public employee pension system — which she then opposed herself.

The move reinforced her close ties with the labor unions but made many members who had stuck their necks out on a very unpopular vote angry.

Brown also controversially sent a letter to the FCC supporting Comcast’s purchase of Time Warner. The letter was drafted by a Comcast lobbyist after donating $10,000 to Brown’s Secretary of State campaign.

As the embattled governor of Oregon, John Kitzhaber, wavered in his decision to resign, Brown released a well-timed and politically loaded death blow to the governor, who it has been reported was actually a good friend of Brown. Her statement called his situation “bizarre and unprecedented.” She alluded to the fact that he was not quite on the ball after requesting her to cut short a trip to Washington D.C. and return to Oregon and then when she arrived in his office for the scheduled meeting he was confused as to why she was there.

Something that is sure to make national headlines, and already has, is that Kate Brown is the first openly bi-sexual governor of a state in United States history. When running for Secretary of State she was boosted by many LGBT activists and supporters across the nation. She says checks came pouring in to help her in her campaign.

Brown loves yoga, studied environmental law at Lewis and Clark College in Oregon and is a large proponent of bicycling and bicycling policies in the state.

Oregon law dictates Brown select her own successor, so it sounds like business as usual here in this great state. Appointed and non-elected are our favorite positions in government. Her position as SoS also dictated her office provide oversight of public spending. If the Cover Oregon debacle, where we lost 300 million dollars to a defunct, non-project, was in her purview then we all should be worried.

We have yet to see what policies may change in Oregon or where education will go under her direction but I’m almost positive it will remain the same. Unless the teachers’ union is able to use their close relationship with her to rein her in on the crazy Common Core mandates it will continue to be controlled by the governor and, now her, appointed OEIB and state school board. It has been said that she’s even more progressive then the corrupt Mr. Kitzhaber and the comments on education that she made in December of 2014 lead me to believe she is following the reformers’ line of thinking.

Brown will remain in office until 2016 when a special midterm election will be held to determine who finishes the rest of Kitzhaber’s abbreviated term.