Seriously folks–do any of you out there truly believe that if you ignore ISIS, it will simply go away?

That is exactly the message that Media Matters and other mainstream outlets are trying to force upon their minions–and we at PolitiChicks witnessed this firsthand after posting this meme on our PolitiChicks Facebook page: 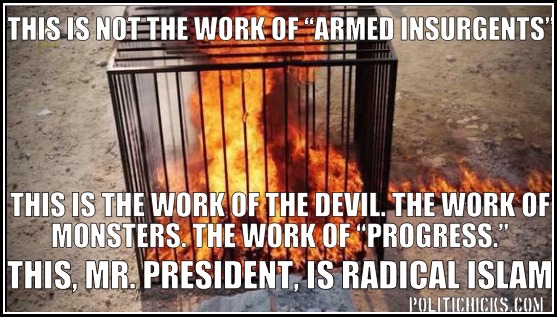 The fury that ensued over this picture was startling because while most people were angry at ISIS for burning an innocent man, others were even angrier at us for posting the picture.

We’ve posted many similar photos relating to ISIS and Islamic terrorism in the past and they always generate passionate responses, but in this instance I found myself fielding constant complaints, accusations, and threats.

Originally the basis of anger directed toward us was because we were supposedly being “disrespectful” by posting the photo.  (Apparently the irony of the word “disrespect” was lost on them…)   In addition to dozens of bot-type messages saying “this photo offends me” I also received two “formal review” complaints from Facebook.

I responded to the complaints by posting this:

“Some people have said it is disrespectful that we are showing the picture of Jordanian pilot Lieutenant Al-Kaseasbeh, who was burned alive by ISIS. You’re right, if this was a picture of our sons it would be unimaginably horrible. But if this was our son & the media ignored his death & ignored the brutality in which he was killed it would be even worse–and you’re missing the point of what the word ‘disrespect’ actually means. IGNORING evil doesn’t make it go away. PRETENDING it’s “not that bad” won’t change people’s perception. Only by facing the ugly, horrific TRUTH & fighting the media & an administration that is trying to REDEFINE Islam is the first step in stopping these monsters from continuing to kill, maim and defile these innocent souls.”

Unfortunately my statement caused even more cockroach-types to come crawling out of the dark crevices onto our page, only now they were making derogatory statement against Christianity.  Very similar, in fact, to what Barack Hussein Obama said on Wednesday:  “Unless we get on our high horse and think this is unique to some other place, remember that during the crusades and the inquisition, people committed terrible deeds in the name of Christ.”

Soon after Obama’s anti-Christian statement, I noticed another trend happening:  Now, instead of of  accusing of us being “disrespectful” or bashes about Christianity, random people were now saying we were aiding and abetting ISIS by giving them a national platform.  Here’s one little gem (edited for obvious reasons):

A few other quotes:

“I don’t want this picture on my wall….This is free advertising for IS and I do not apprecciate it being posted on my page.”

“By posting that picture, you did exactly what these killers wanted. They want recognition. You are giving them just what they want.”

I learned the reason for the new tide turning is because they were following the talking points as given to them by Media Matters and Obama’s minions.  In a nutshell, the problem isn’t ISIS, it’s the people talking about ISIS who are the real problem.

Here are two headlines from Wednesday: 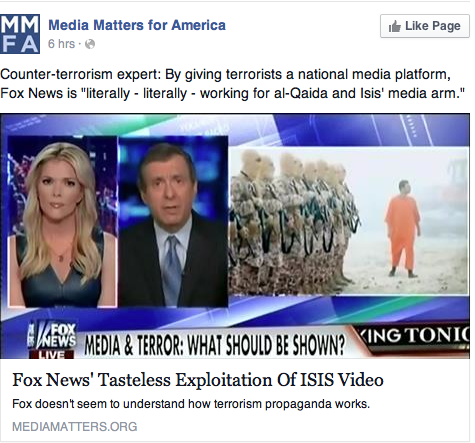 In other words, look away folks.  Pretend everything’s a-okay.  Continue to ignore those pesky Jihad rapists that Robert Spencer and Pamela Geller and Daniel Greenfield and Jamie Glazov keep talking about.  Forget about the non-stop beheadings, the slaughter of Christians world-wide.  This is only a group of Junior Varsity Lone Wolf radicals–as bad as any other religious-types.  And if you ignore them, maybe they will simply go away….or maybe they won’t. 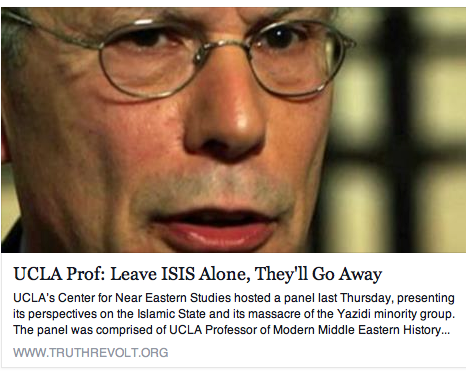 By the way, the main reason we do what we do is because of this comment on our Facebook page:

Obama Lied: There is No Economic Recovery