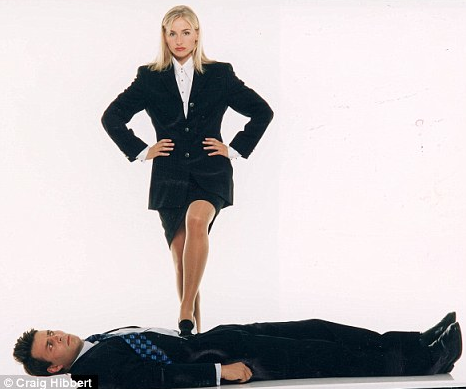 Sarah Silverman and Chelsea Handler were recently featured in a commercial for T-Mobile, which resulted in the hashtag #SorryItsABoy trending on twitter. You can watch the commercial here: https://www.youtube.com/watch?v=iTQd0XYgo4E

This is not funny! It’s appalling and I absolutely despise this brand of feminism.  Originally feminism was about equality between the sexes, giving women the right to vote, etc. Now feminism has evolved into a man-hating monster. This brand of feminism is not only disgusting it is the exact opposite of what the original feminist movement was about, only now the roles are reversed. Feminism today is not about equality, but superiority of the female sex. Not only do feminists seek to elevate the female sex as better than men, but they do everything they can to emasculate men and undermine their ego.

Men have very sensitive egos to begin with and it doesn’t take much of this man-hating behavior to utterly emasculate them. Feminism has gotten so out of control, that is has gone from a champion of equality of the sexes to a man-hating, female superiority movement.

The irony of this man-hating movement is that feminism is now endorsing the very thing it fought against:  Superiority of one sex over another.  Or perhaps they think they are getting their revenge for all those years of “female oppression.”

The lunacy of these gender wars is that there would not be any women without men, just as there would be no men without women. So the existence of the sex, whom you feel is superior, would not even be possible without those whom you feel are inferior. How can you feel that someone crucial to your existence is inferior to you? So not only is this man-hating feminism appalling and disgusting, it’s illogical.

Our value is not based on our gender or what we do best. We are valuable because we are human beings created in the image of God.

I honestly wonder what all these man-hating women would do if they found themselves in physical danger and “prince charming” came to their rescue. Would they turn on him and say, “How dare you rescue me I can take care of myself”? I don’t think so.  I believe I speak for all of us here at PolitiChicks in saying that this man-hating feminism is appalling.

Brian Williams Is A Disgrace to Journalism.