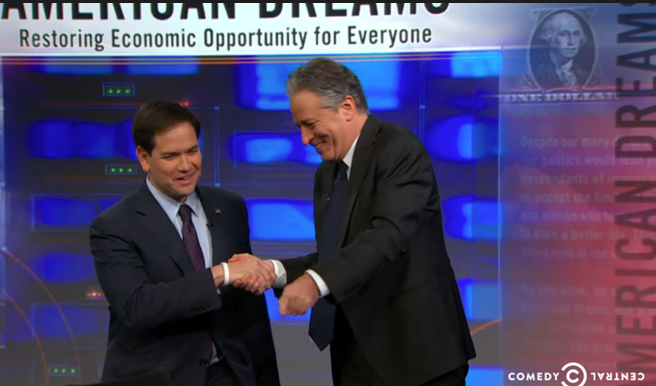 With Romney dropping out of the 2016 presidential race the media wants us to believe Jeb Bush is the GOP frontrunner.

It is still very early to make any predictions. I would like to see a current or former governor get the nomination and for me Governor Scott Walker would be an excellent candidate. He has been tried and tested and successfully turned around the state of Wisconsin. If he had any skeletons in his closet they surely would have surfaced by now. We know the media will be relentless in their pursuit of anything to topple the conservative candidate. As a progressive, Jeb Bush will not be scrutinized so intently.

One of the names being bandied about is Senator Marco Rubio, and I am taking this opportunity to share why he should not be the nominee.

In 2010 Rubio courted Tea Party conservatives in Florida, who volunteered and worked tirelessly to get him elected to the Senate. He said the right things and convinced us he was the real deal, a true conservative. Once elected, however, he quickly immersed himself in the GOP establishment and has proven to be a big government progressive. His work with the Gang of 8 in support of comprehensive immigration reform, aka amnesty, without first focusing on sealing the borders, pretty much sealed it for us.

Recently, Marco Rubio made an appearance on The Daily Show with Jon Stewart. The “crown prince” of the Tea Party movement is making the rounds, feeling out a potential run for president in 2016. He is also promoting his book, American Dreams: Restoring Economic Opportunity for Everyone.

On the Daily Show, Rubio proposed that the Earned Income Tax Credit should be expanded. Currently this is a government subsidy awarding thousands of dollars to families if they qualify when filing their yearly income tax returns. Senator Rubio suggested it should be a wage enhancement for those who earn under a certain amount of money, whether they have families or are single, and that it should be included in every paycheck. This sounds more like a corporate bailout and a way to make people comfortable in their current economic status. Corporations like happy drones and Senator Rubio seems to have found the answer through government largesse.

We know the 21st century presents serious economic challenges, but conservatives also know bigger government and wealth redistribution is not the answer, unless the question is socialism.

When questioned by Jon Stewart, Senator Rubio asserted what he proposed does not go against the conservative beliefs of the Tea Party. He said he was taking limited government and free enterprise and moving it into the 21st century to answer the challenges of the 21st century.

To his proposals, Jon Stewart told Senator Rubio, “In your heart you’re a Democrat.”

Not only should Rubio not be considered as a potential presidential candidate in 2016, he should lose any bid for reelection as senator from Florida.