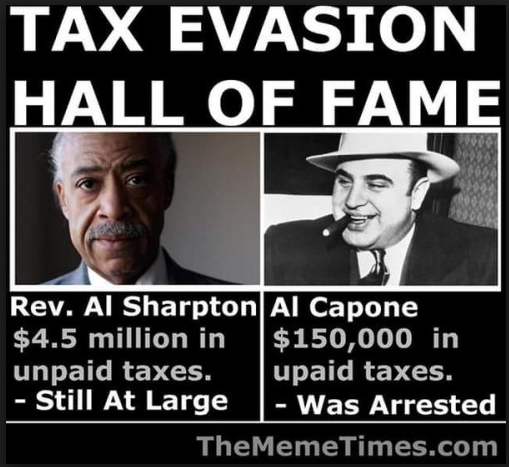 On Facebook, I recently posted that my husband and I reached a significant milestone.  After 15 years of being a partner of a small business, our debt to the IRS is now $0.00. To someone who has never had to write a check to the IRS, this may not seem like a big deal. However, to those who have found themselves on the receiving end of a hostile and aggressive IRS collection department, it is like winning the lottery–albeit a short-lived victory until next tax season.

Many small business owners struggle to meet their tax obligation quarterly. Often when filing their annual taxes, they are surprised to discover that a once standard business deduction is no longer allowed. Even small changes can equate to business owners owing thousands in taxes, penalties, and interest. In my experience, penalties and interest are often larger than the actual taxes owed.

So it is difficult for me, an honest taxpayer, to understand how someone like Al Sharpton can avoid jail despite owing $4.3 million in back taxes–or that in order to elude paying, he simply closes down one business and opens another. This is especially daunting knowing the influence he has in D.C. and Hollywood.

Our own government has thousands of federal employees owing over $80 million in back taxes, with staff representing departments such as Social Security, Department of Human Services, and (ironically) the Internal Revenue Service.

In other words, the very agencies that are responsible for implementing Obamacare and taxation are themselves delinquent on their own tax debt. Unfortunately, both Sharpton and those federal tax-evaders are still gainfully employed, continuing to hold influence over law-abiding taxpayers.

In his recent State of the Union speech, Obama asked Congress to approve a $4 trillion budget that equates to higher taxation and spending and more wasteful duplication of services. The President never mentions, as he did in his 2008 campaign speeches, the promise of going “line by line in the budget” and “eliminating the waste, fraud and abuse of taxpayer funds.” Instead he asks for a larger handout and completely ignores accountability.

The President claims the only reasonable way to invest in infrastructure and free community college is to ask the top wage earners to give their “fair share.” The problem with this is that top wage earners include small business owners—aka the middle class. We’ve already been through the math that even if you tax 100% of wages, you still won’t pay off the money being spent each year.

Obama is also requesting comprehensive immigration reform. Such plans mimic his approval for providing over 5 million illegals work permits since 2009—and a work permit is one of the acceptable forms of identification in obtaining a Social Security number. But did you know that if you are a U.S. born citizen, your birth certificate is no longer a valid form of identification? Not only that, if you call your local Social Security office, you will be informed that if you try to use your birth certificate as ID it will be immediately handed back to you.

Why does this matter to you? Because if you ever lose your Social Security card and/or need a replacement for whatever reason, you will be faced with having to obtain more records than an illegal does in order to obtain the same card.

And of course with a Social Security card, a person living in the U.S. illegally can now file taxes and benefit from the same deductions as you, a legal citizen, including the child tax credit. These tax credit deductions alone results in billions of dollars in refunds to illegals each year.

Actions by this administration in the last 6 years have sent a clear message to law-abiding citizens: if you are in this country illegally–or your name is Al Sharpton–you’ll get IRS perks no one else following the law will benefit from.