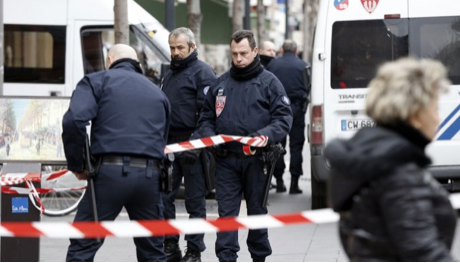 BRUSSELS, Belgium – Reports out of Nice, France indicate that at least three French soldiers were injured by a knife wielding man while on patrol outside of a Jewish community. According to Nice Mayor Christian Estrosi, the attacker was detained and carrying an ID card with the name Moussa Coulibaly. The name Coulibaly is the same last name as the Kosher Deli Terrorist who gunned down four Jewish men last month in Paris. At this time, there has been no relationship established between the knife assailant and the Kosher Deli terrorist.

According to a police official, the attacker was alleged to have pulled a knife at least 20 centimeters (about 8 inches) from a bag. He then attacked one of the soldiers causing an injury to the soldier’s chin. Next the knife welding maniac is said to have swiped two other soldiers, cutting one on the cheek and the other on the forearm. He was then apprehended by riot police who were stationed near the building where the attacks occurred. The building was reported to house the city’s Jewish Community Center.

The manager of the center, a woman, reportedly confirmed that it was the soldiers in front of the Jewish Center who were attacked. She was afraid to give her name out of concern for later attacks. According to the woman, the attacks occurred during lunchtime and no one was outside the office.

Police officials indicated that the man was approximately 30 years of age and had a record of violence. The official spoke on condition of anonymity because the case was ongoing. The attacker’s motive was not yet known and police were continuing to seek answers.

In related news, police in Paris arrested eight people who were suspected of being involved in a network that was sending people to Syria to fight with ISIS. This was according to the French Interior Minister, Bernard Cazeneuve. He explained that the terrorist were arrested near the capital of Paris and also in the southeastern city of Lyon.

Abstraction (the Ugly Cousin to Historical Revisionism and Moral Relativism), Know it When You See it.