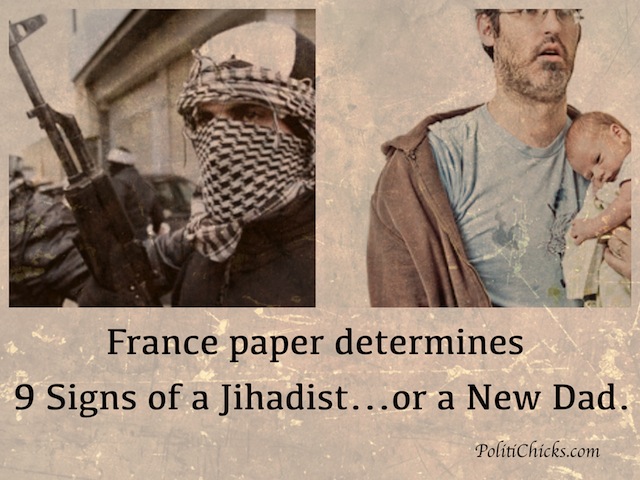 BRUSSELS, Belgium-The French government has organized a list of symptoms that may indicate someone is considering becoming a Jihadi Terrorist. Including in the list are things like

1. No longer listening to music
2. No longer viewing television or going to the movies
3. Ending any involvement in sports

The officials claim these are tips that can indicate the individual has become radicalized and believes continuing such behaviors would distract them from their mission or faith. Other signs to look for, according the French, include:

4. A dramatic change in their eating habits. This might mean they no longer eat with groups of friends or no longer eat out at restaurants. It may also include suddenly ordering a great deal of delivery pizza.
5. They may suddenly significantly change the way they dress. For instance, women may begin to dress in a fashion that hides their figure, as in a hijab or full burka.
6.  These same individuals may no longer trust their former friends. This is especially true if they feel their friends are not religiously faithful or are somehow impure. Along with rejecting their friends they may begin to
7. Reject family members for some of the same reasons.

The last two signs of radicalization include

8. Leaving school or other training
9. Seeking out information from extremist websites. The French claim a potential jihadist is likely to drop out of school because they mistrust the education system, so they may start searching extremist websites that offer social media contacts with likeminded radicals.

Ironically, a French paper called The Local, has criticized the 9 signs of a potential Jihadi Terrorist and said these could just as easily be signs of a new dad. Somehow, they have equated new parents with the same symptoms that might be found in suspected radicalized Islamic Terrorist. The paper made ludicrous comparisons such as saying, “While dads don’t really change what they wear so much, they are however far more willing to wear a jumper to work covered in baby sick.” One other example of liberalism run amuck on The Local can be found in their comments regarding the suggestion that viewing extremist websites could be symptomatic of potential jihadist. “While ‘lalecheleague.org’ and ‘mumsnet.com’ do not promote violence of any kind, they do have some pretty extremist mums on there suggesting some pretty radical things like ‘talk constantly to your baby.”

If the French are unable to distinguish between the changes in behavior of new parents and that of potential jihadist, they have bigger problems than terrorism. Such willful and blind ignorance to obvious signs of danger indicate a problem that goes far beyond the need to have a list to help identify jihadists. This kind of attitude seeks to insure that jihadist will continue to flourish in France and more lives will be lost to politically correct arrogance.

Abortion Is NOT the Only Choice.

What Color is the Sky in Obama's World?