The sky over New York City was a falling sheet of white. Trails of footprints, work boots, paw prints, sneakers and bird claws, told their own story of how the residents of city were getting through the blizzard to their daily errands. Shoppers lugged home milk as if cows were going extinct. Miniature snowmen decorated mailboxes and garbage trucks towing orange plows clattered down empty streets.

Nowhere in the city was the blizzard more pronounced than in Central Park, designed a century ago to create a miniature forest in the heart of Manhattan. Even the tallest trees, taller than any others in the city, were layered with coats of snow and visibility had vanished into a cloud of whiteness.

And walking along a path in the Ramble, I heard a woman lecturing her children on the dangers of what else, but Global Warming. 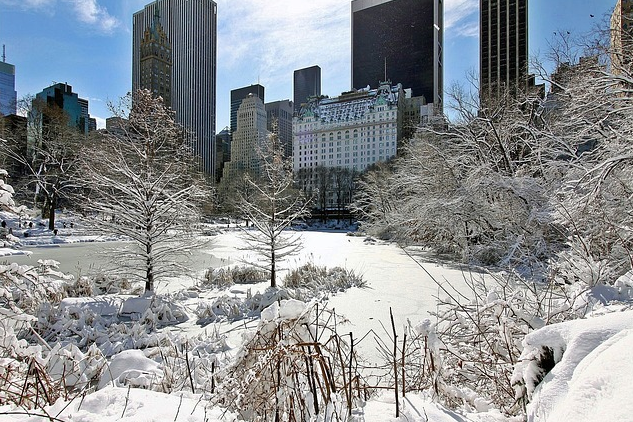 There is a madness to walking through a blizzard and discussing Global Warming. A theory according to which we should be sliding toward the tropics, awash in fleeing polar bears and Florida style temperatures, instead of frantically shoveling our driveways.

The Warmist does. To see Global Warming while walking through a blizzard, is itself an act of faith.

Every winter, Global Warming advocates stake their bets on a mild winter. And every winter the snow and ice break their cars and shoes, but never their faith.

No matter how much slush trails through its lobby, its writers must continue to show people the pernicious effects of people driving to work and using extra shopping bags. Digging out of a snowstorm and their own lies, Global Warming advocates claim that colder winters are actually another effect of global warming. Which may be renamed to Global Temperatures We Don’t Like.

Walking through Central Park, it’s easy to see how perverse the modern day environmentalist has become in his view of the relationship between man and nature.

Central Park was inspired by one of the co-founders of the Republican party, New York Post editor, William Cullen Bryant, and co-created by Republican architect and landscape designer Frederick Olmsted, to harmonize the natural world and the urban one through human industry.

The New York Republicans of the 19th century viewed public parks as part of their civilizing mission.

Central Park was created as part of an ongoing battle with the corrupt Democratic Tammany Hall machine, which wanted segregated slums and downtrodden workers who would rush to them as saviors and vote how they were told.

Bryant and Olmsted saw parks as a way to improve human health, inspire public citizenship and build a strong republic.

Central Park’s beauty is both natural and artificial. Modern environmentalists often mistake it for a preserved space, but its natural beauty was the work of human craftsmanship. The original site was a mess of swamps. The sort of place that the EPA fights tooth and nail to protect for the environment. Had Central Park remained a mass of swamps, the city and the country would have been worse for it.

Instead of preserving the wetlands, Central Park’s planners dredged them. They created a place of great natural beauty by taking what was best in the natural world and matching it to human use, instead of blindly worshiping at the pagan altar of “Mother Nature”. They built a lake so that visitors could row boats. They set up rambling paths between woodlands of trees that they planted. A meadow rose along with sheep and a shepherd. Everything was natural and artificial. 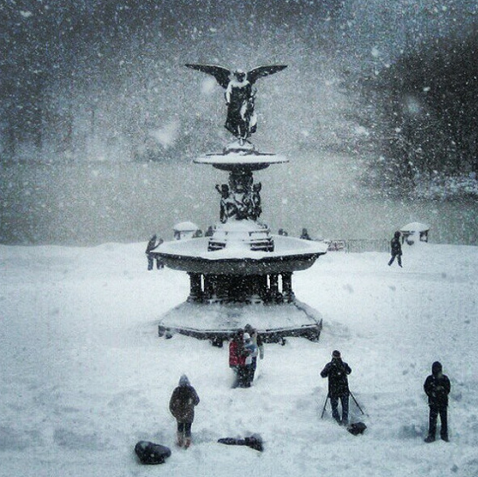 While today’s environmentalists are fixated on holding back human development in order to maintain wetlands, banning DDT to save the mosquito and campaigning against agriculture to reduce population growth– the visionaries behind Central Park did not restrict human development for the sake of nature, instead they used human industry and the state of the art technology of the time to turn a decrepit site used for slaughterhouse refuse, swamps and shantytowns into a magnificent park that seems effortlessly natural.

They did not do it to glorify nature, but to improve man.

Conservationists, who included the likes of President Theodore Roosevelt, valued the natural world for what human beings can learn about themselves from engaging with it. That was the philosophy behind Central Park, which to this day remains an elegant demonstration of human accomplishment as applied to the natural world.

Global Warming is an ideological weapon by the environmentalists against human civilization. It is part of a broader anti-civilization agenda by the left, which values the natural world only because it sees it as a “primitive” antidote to the complexities of civilization. That romanticism is the borrowed hostility of the nomad to the farmer (and it is very telling to look at Europe and see its intellectuals championing the virtues of Bedouin nomads over London and Paris) taken up by bored intellectuals, arguing against the complexity of civilization and for the noble barbarism of the savage.

Central Park does not duplicate Manhattan before the arrival of the settlers, a trendy bit of landscaping that environmentalists are rather fond of. But then who besides environmentalists would fancy the idea of reverting Manhattan to a swamp bordered island with poor water sources and high rates of disease? Instead it creates something better, improving on the natural world, cultivating land into a transcendent statement that is more about man than nature.

Where Global Warming insists that everything humans do just makes the world worse, Central Park is a shining statement that says we make it better.

Every Warmunist ad is a parable about the evil of humans who chop down forests, pour oil into the oceans and refuse to put things into clearly marked recycling containers. Central Park opens up the natural world to human activities. The ideas of Olmsted about good citizenship and the natural world did not involve teaching people to leave the natural world alone, but to make it a part of our cities. 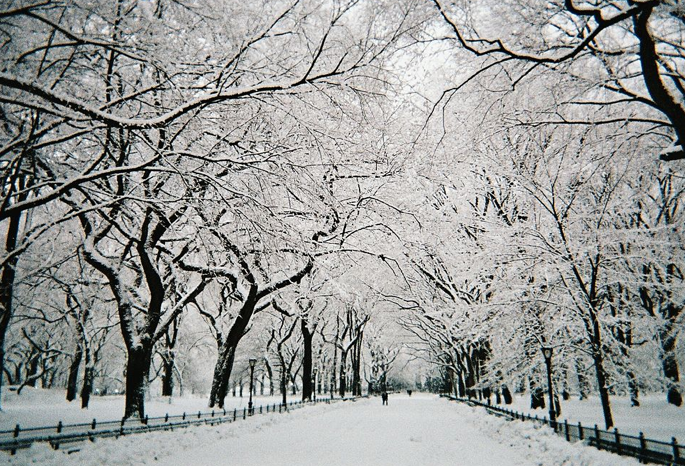 Environmentalists today sneer at this attitude. They clamor against hunting and fishing. They agitate to restrict human access to national parks. They push Zero Population Growth and mandatory birth control. Their “Green”, like that of the Islamic Green, burns with hate for the Red, White and Blue. For human civilization.

Much of the public thinks environmentalism is a good idea, because they think it’s ultimately meant to benefit them. Environmentalism however is an ideology that champions the Supremacy of Nature, better known as the ecosystem covering the surface of the Earth, over man. Where Conservationism believed in the Supremacy of Man, and the utilization of the natural environment for mankind’s benefit, the environmentalist doesn’t give a damn about mankind’s benefit. Less so than he does about an endangered mollusk.

Walking through the blizzard, the trees wreathed in bridal veils of snow, I heard their voices in the distance, a distance that in the whiteness may have been only a dozen feet away. “The scientists say Global Warming is coming”, the mother said. “It’s too cold out for that,” answered the little girl.

The Abortion Debate: When Does a Human Being Begin to Exist?

Abortion Is NOT the Only Choice.