Last year, the New York Times predicted the end of snow. This week, its employees had trouble getting to work because of a travel ban caused by the blizzard. And those New Yorkers still subscribing to the print edition of the Old Gray Lady of Eight Avenue were even more out of luck.

Snow wasn’t over, but the New York Times was. 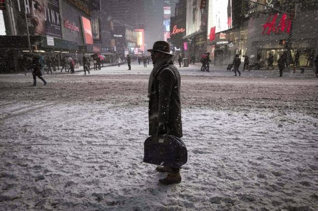 A few days after the New York Times forecast a snowless future in 2014, a major snowstorm (which didn’t read the paper and wasn’t aware of the 97% scientific consensus) hit shutting down airports, causing major accidents and killing dozens of people. Thirteen inches of snow fell over the city.

A week after warning of the end of snow, the New York Times was instead forced to report on “downed power lines, stranded travelers, abandoned vehicles and yet another mess of snow, slush and ice.”

CBS This Morning, which originally broadcast claims that the snow was going away, has now been forced to put its staff up in hotels near the studio and bus them in. Don Dahler, the CBS correspondent involved, was complaining on Twitter about how badly Long Island had been slammed by the blizzard.

Once again the snow beat the snow-deniers.

The snow deniers have been around for a while. Fifteen years ago, Dr. David Viner, a senior research scientist at the University of East Anglia, the hub of Warmism, said that within a few years winter snowfall will become “a very rare and exciting event”. “Children just aren’t going to know what snow is,” he said.

Indeed somewhere Dr. David Viner was probably cursing the snow for still being there while small children laughed at him. “Snow is starting to disappear from our lives,” The Independent had asserted then. Instead the UK is headed for a displaced polar vortex bringing with it some of the coldest temperatures on record.

“The effects of snow-free winter in Britain are already becoming apparent”, The Independent had claimed. They may not however be nearly as apparent as the delusional state of the Global Warmist.

Instead of preparing for snow-free winters, northern Britain is preparing for “freezing gales” and arctic air. Forecasters are predicting “very severe and extreme weather” early next month.

The snow clearly isn’t going anywhere. But neither are the Warmist weather deniers.

A few days before the blizzard; Al Gore was promoting Live Earth concerts across seven continents, including Antarctica, to push the Warmist wish list of taxes and bans.

Gore, who had been urging a $90 trillion plan to end cars, wants a concert tour across every continent on the planet, including one that isn’t even meant to be inhabited.

These “Climate Action” concerts to save the planet will take plenty of flying, but that never stopped the environmental crusader who flies around the planet as if it really will be destroyed next year.

Gore had predicted in 2008 that the North Polar Ice Cap would be completely free of ice in 2008. Next year he postdated it to 2014. The snow-free apocalypse is always going to happen next year.

Or maybe the year after that,

Pharrell Williams, the latest celebrity partner in Gore’s Green dreams, had flown a private jet to Davos. But his jet was only a tiny dot among the fleet of 1,700 private jets that had descended on Davos to discuss action on Global Warming. 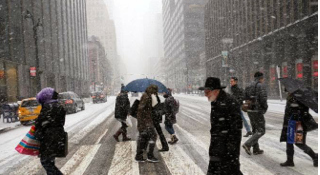 Davos is currently a balmy twenty degrees, about the same as New York, but the cold weather never freezes out the narrative. When it’s warm outside, Global Warming is to blame. When it’s cold out, Bill Nye, a comedian whose claim to fame is wearing a bowtie and hosting a PBS kids show, is invited on to blame Global Warming.

“I just want to introduce the idea that this storm is connected to climate change,” Bill Nye announced on MSNBC; the news network that is to science what Al Sharpton is to teleprompters.

Nye graduated in the seventies from Cornell with a BS in mechanical engineering. He kept applying to NASA to become an astronaut to fulfill his lifelong goal of “changing the world”.

But Nye didn’t want to change the world badly enough to actually get a PhD. “I’d love to get a Ph.D in applied physics or fluid mechanics, but that’s a seven- or eight-year commitment.”

No eight-year commitment is required to go on MSNBC and blame a winter storm on Global Warming.

What was Nye’s scientific basis for his conspiracy theory? Much like his PhD, he didn’t have one. Last year during a snowstorm Nye had also been invited on MSNBC to blame Global Warming.

“Cold weather events are difficult to tie to climate change,” he said. “But it’s very reasonable that it’s climate change.” You could easily substitute ‘Aliens’ for ‘Climate Change’ with the same exact results. You could also swap in Pee Wee Herman for Bill Nye and get a more fact-based response on virtually any scientific topic.

Since Climate Change, the ambiguously vague successor to Global Warming’s failed promises of a snow-free world, can mean anything, it can also be blamed for anything. It’s reasonable that if it snows tomorrow or if it doesn’t, that the culprit is climate change. After all the weather changed, didn’t it?

Whatever the weather, it’s a crisis.

And the only solution is more concerts in Antarctica, more taxes, more bans, more environmentalist consultants and more appearances by comedians who want to change the world by forcing everyone to commit to poverty and misery, but couldn’t be bothered to make the eight-year commitment to a PhD. 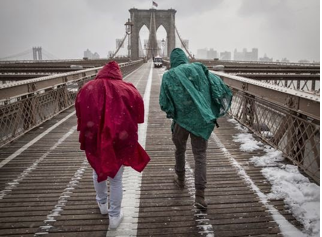 While it’s easy to ridicule the ecovangelists prophesying the end of snow, the celebrities flying private jets to save the world from themselves and the clowns in their bowties blaming the snow on Global Warming, it would be dangerous to lose sight of the wizards behind the curtain.

The United States Senate Committee on Environment and Public Works’ Minority Staff Report chronicled how a “Billionaire’s Club” runs the environmental movement and the EPA for its own agenda. More recent reports have shown how the Russian government finances environmental groups in the US.

The confrontation in the Ukraine forced the New York Times and Foreign Policy to report on the Russian government’s covert backing for environmentalists in Europe. But the oil-soaked cash flowing to environmentalists in the US is still off limits even with Al Gore collecting $100 million from Qatar.

Eco-doomsday is big business for everyone from foreign energy businesses to domestic billionaires looking for more grants, loans and mandates. Environmentalism stopped being the eccentric cause of technophobic hippies and became big business. And it will take a big shovel to sweep its snow job away.

4th Grader Suspended For Having an Imagination.

Despite ISIS Ramping Up Brutality, Obama Labels Them an "Organization"