In a speech at the Department of Homeland Security, Obama declared that he wants to “replace mindless austerity with smart investments that strengthen America”. Those “smart” investments scattered across a gargantuan $4 trillion budget include a $500 million Green Climate Fund for the Third World and $105 million to help the government build better websites.

Obama is fond of putting the word “smart” in front of stupid ideas to make them seem less stupid.

The $4 trillion budget is actually as stupid as the new left-wing Greek government elected on a platform of not paying its debts. This new government intends to replace the old policy of getting money in exchange for cutting spending with a new policy of not cutting spending and demanding money anyway. So far this new policy has been rejected by every country from Germany to China.

Greece has managed to spend itself into a debt that stands at 175 percent of its GDP. But of course we’re Americans. Our “smart” government with its “common sense reforms” and eagerness to spend a vast fortune to build better websites couldn’t possibly have dug us into a hole that deep.

Our debt-to-GDP ratio is only 101 percent. Under Bush, it stood at 64 percent. By the time the last election rolled around, it was nudging 100 percent.

But that’s no reason for “mindless austerity”. It’s no reason to stop investing in things like spending hundreds of millions of dollars to help Third World countries buy crudely inefficient solar panels from China that will break down even before our economy does. Obama’s idea of “smart” investments that “strengthen America” is to borrow money from China to buy things from China for other countries. That’s not even a smart investment for China which has been reducing its holdings of US Treasury bonds because it’s not all that confident in our “smart” investments.

“You have to be prepared to blow the whole thing up, simply by being intransigent if you are not taken seriously,” he declared.

That’s also Obama’s strategy. Intransigence and blowing up the economy is all he brings to the table. Greece’s finance minister plans to go after multinationals and the rich to close the gap. Considering how fast the wealthy and corporations fled France when its Socialist government tried that, you can only imagine what will take place in Greece. But the Greek leftist strategy is also Obama’s strategy. Both act as if the existence of a massive debt is something that they can ignore if they feel like it. Debt, like war, will be over if you want it to be. You can wave it away with imaginary economics. 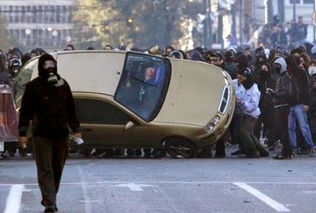 Obama promises that his illegal alien amnesty and ObamaCare boondoggles will save us so much money that a $4 trillion budget will be no challenge. Every one of his disastrous proposals can be paid for with their own promises. Money is being spent using his own speeches as the IOU.

The Greek left is doubling down on unions, attacking privatization and hiring more government workers. Its priorities are the same ones as those of Obama, Jerry Brown or Bill de Blasio. The attacks on austerity use homeless families as human shields, but they are really about protecting the institutions of the left.

Austerity simply means living within a budget. The Keynesian budgetophobes, who portray budgetary restraint as the plot of some Dickensian villain, insist on more “smart” investments in big government. And when you’ve made enough “smart” investments that your bonds are junk and the banks won’t lend you any more money at favorable terms, then it’s time to denounce that austerity.

The left makes crazy promises that it can’t keep, spends money it doesn’t have and then waits until a halfway responsible government gets into office so that it can denounce its austerity cutbacks. It goes deep into debt to international banks and then rants and raves against them. And then it asks them to lend it more money. It denounces the European Union, but suckles greedily at its financial lifelines.

Obama denounces a “mindless austerity” that his own mindless spending and refusal to compromise made necessary. His $4 trillion budget consists of phantom taxes that will never be collected, imaginary savings that will never materialize and entirely real amounts of money being spent to create a huge pile of debt and massive deficits down the road.

The closest thing Greece has to a plan is to turn to Russia in the hopes that either Vladimir will be generous or the EU will panic at a breach in the sanctions on Russia and cut Greece’s debt some more. That’s not economic reform; it’s political terrorism aimed at extracting money, not for a recovery, but to delay the reckoning a little longer before dumping the problem into the lap of another government.

Obama is all too familiar with that brand of political terrorism. When S&P downgraded Treasury debt, former Treasury Secretary Timothy Geithner warned that the credit rating firm would have its actions “looked at very carefully.” A $5 billion lawsuit followed. Whether it’s the American left or the Greek left, they both still believe in solving their mathematical problems at the point of a gun. Obama needs Wall Street the same way that the Greek left needs the European Union. It’s a corrupt and dysfunctional relationship in which after all the noise dies down, the real losers are the taxpayers.

Greece’s tax revenues are already falling. Its plan to squeeze more money will only accelerate the process. Obama’s plans to loot revenues outside the country are even more willfully delusional. That leaves what’s left of the middle class as the biggest target. Google isn’t going to let Obama pick its pockets. But the middle class has fewer options. Obama’s plan to tax 527 college fund savings has been aborted, but it’s only the first shot across the bow of the upper middle class and then the middle class. 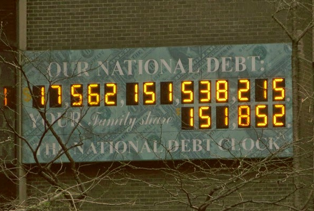 When Obama talks about “middle class economics”, what he really means is an economics built on taxing the middle class. His budget, with its expansion of the earned income credit and free community college, doesn’t offer much to the middle class, but it takes a lot. And what it takes most of all is their future.

Debt is about more than just money. It’s about the end of expectations and the death of hope.

Polls of Greek adults showed them to be the biggest pessimists globally, but Americans are catching up. Three quarters of Americans are not confident that their children will live better than they will. The first American generation to see a decline in living standards has been born under a cloud of debt, surrounded by rising prices and falling incomes. It sees a government that spends trillions in their name which they will be expected to somehow repay with the jobs that don’t exist anymore.

The generations of tomorrow will be the ones left holding the bill for Obama’s debt. His $4 trillion budget is paid with the coin of their lives and dreams. His debt is their future.

Are Parents Missing the Point?