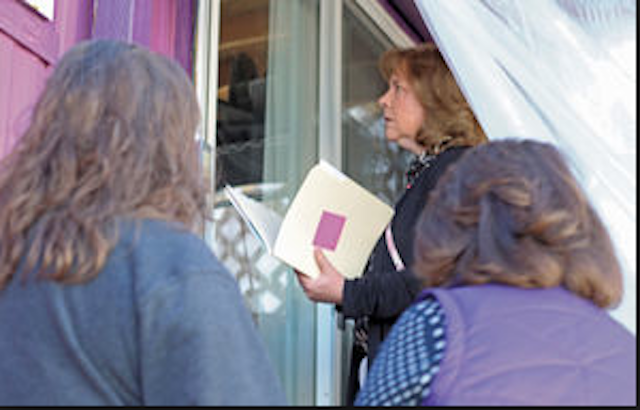 An article in a newspaper here in Oregon caught my eye this weekend. The headline read: Volunteers Knock on Doors to Get Students Back in School.

What an interesting concept. Volunteers trying to get local kids back into their desks. I doubt that it has anything to do with money, even though for every child not in their seat the school district loses that money, which in some districts can be up to $10,000 per child.

When first reading the story I knew there must be more to it than some altruistic, albeit a little annoying, do-gooders who volunteered to try to wrangle the kids back to school.  According to the article, “More than 20 volunteers spent Saturday morning knocking on doors in the Klamath Falls area in an effort to encourage students from Mazama, Henley, and Klamath Union High Schools to return to school.”

Hmmm…they are looking to encourage children to go back to school and there will be “no punishment.”  That’s great, isn’t it?

One thing that stood out to me is that the volunteers are so determined that when they come to homes where nobody answers, they leave a door hanger with a free coffee certificate from the local coffee shop.

Of course they were given hints and tips before their excursion, including educating parents on what resources (read: government programs) are available to them and their families and to reiterate that this is encouragement and not punishment.

A vice principal from one of the high schools also took part in this walk around town to bribe kids with a cup of coffee to go back to school.

Of course being a cynic I immediately wondered who is paying for all that coffee. Perhaps it was donated. But I still needed to look further because according to the newspaper the volunteers had previously met at the community college to discuss the Klamath Promise Graduation Walk, before heading out to more than 15 students’ homes who had missed a significant amount of school in the recent months.

The word “promise” stuck out to me. I’ve seen and heard about the “Promise Neighborhoods” that Arne Duncan loves so much. The purpose of a Promise Neighborhood is “to support the development of a continuum of cradle-through-college-and-career solutions…” (Cradle to grave nanny state, anyone?)

If you follow the link at the bottom of the article to Klamathpromise.org you will see that under the resources tab it highlights the Common Core. Interesting, Watson!

Obviously I needed to dig further. I eventually clicked on links that took me directly to America’s Promise. All you need to do after finding an organization’s website is to click on donors or partners or alliances and you can see where the money comes from, ie, who is behind it all, including who is ultimately directing those “volunteers” in Klamath Falls who may or may not know a single thing about who they are actually pounding pavement for.

“The challenges facing today’s children and youth are too complex and interrelated for any one sector or organization to solve alone. Success requires participation from a range of stakeholder groups working together in coordinated and collaborative ways. This collaborative approach is central to America’s Promise, and our national Alliance is the embodiment of it.”

And the people or groups or organizations behind it?

Let me name a few:

GLSEN (gay, lesbian, straight education network; what does this have to do with school?)

College Board (David Coleman is the head; he authored much of the Common Core)

And the list goes on. There are over 300 partners listed in their directory of donors.

This is the reason that every time I read something that seems like a “feel good” story, I have to dig. Look behind the curtain. Investigate. What does it get me? Only the knowledge that there are always people with deep pockets and financial/progressive motives waiting in the wings.

This knowledge helps me to be better prepared and more knowledgable about the world about me.

Nothing is ever as it seems.

Cheap Date: A look at the Democratic Party & Black America