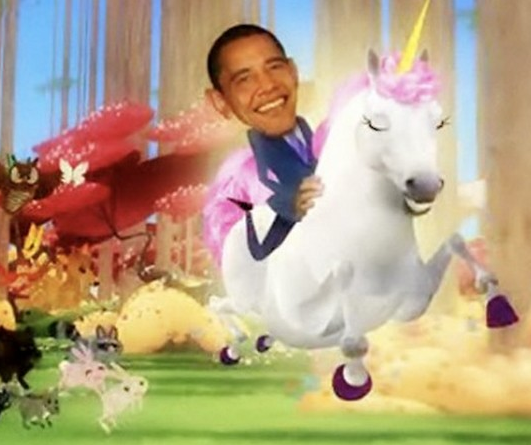 After watching President Obama’s State of the Union address last week I have come to realize that Obama and I must live in vastly different worlds. Mr. Obama lives in a world where deficits have been cut and unemployment is low and where people are entitled to other people’s stuff just because they were born. In Mr. Obama’s world more than nine million Americans are thrilled to have signed up for Obamacare, even though over 8 million of the nine million were already on a Medicaid system. In Mr. Obama’s world there are no radical Muslim extremist who want to destroy America (even if their YouTube videos proclaim they are). And in Mr. Obama’s world all those mean employers have more than enough money to increase salaries to all their abused employees without affecting the prices of their products or services.

ObamaWorld is a world of Blacks vs. Whites; Haves vs. Have Nots; 99 Percenters vs. 1 Percenters.

In ObamaWorld all who disagree with Mr. Obama are racist, sexist, homophobic, angry, old white Republican men (even if their name is Susana Martinez, Mia Love, or Tim Scott).

And in ObamaWorld there is no Constitution and no system of checks and balances that a simple pen and phone cannot transcend.

In my world, however, 90 million Americans are not working, many because they have not been able to find work in years.

In my world nearly 50 million Americans are receiving food stamps to feed their families. The racial divide is at its greatest in over 40 years and the debt has exceeded 18 trillion dollars and continues to climb.

In my world Americans are hurting and worried about their future and fearful that they are losing their freedoms.

In my world 400 hospitals have closed since the Obamacare law passed congress and Americans are paying more for healthcare insurance and their deductibles have drastically increased.

Can these two worlds exist in the same universe? That is the question that We the People must answer.

The Winning Alternative: Replacing Obamacare as it Implodes