As humans, many of us want to control the beginning and the end of life.  Many individuals have sadly cut their lives shorter than ordained for them.  But their end of life was not the original plan, designed specifically for them.  Psalm 139:16 tells us, “all the days ordained for me were written in your book before one of them came to be.” (NIV) 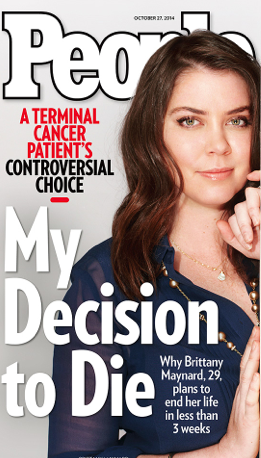 In reality, we really only have control over the time between the two ideas of life and death.

In the fall of 2014, in a span of twenty four hours we saw how two young ladies dealt with a similar situation with two very different results.

Please understand this isn’t a platform for discussing euthanasia or the right of someone to end their life prematurely or “on their own terms.” Rather, these circumstances afford us the opportunity to see how individuals choose to react to unthinkable, indescribable occurrences in life and the results of those decisions.

Brittany Maynard was a 29-year-old newlywed who suffered with terminal brain cancer and chose November 1st to be her day to die. Her reasoning for this decision was based on a desire to “die with dignity.” Her belief in controlling the end of her life was not that she was taking her life, but rather maintaining control over the cancer that was killing her.

No one can put words to Ms. Maynard’s decision; respectfully, it was hers and hers alone. Ms. Maynard chose to be the face of those who desire the opportunity to choose the day they say, enough is enough to their deadly disease. At the time of Ms. Maynard’s decision, five states allowed patients to self administer prescribed medication to end their life. Since her death in November 2014, four additional states and Washington D.C. have introduced legislation for patients to “die with dignity.”

Humanity will continue to discuss the process of dying with dignity or assisted suicide, whatever your perspective. That conversation is only part of the entire discussion.

Another young lady, Lauren Hill, exemplifies the other side of the discussion. Lauren is a 19-year-old freshman at Mount St. Joseph College in Cincinnati, Ohio. ESPN’s Tom Rinaldi shared Lauren’s story with the world late in 2014.

Lauren is suffering with a deadly brain tumor, normally found in children. Diffuse Pontine Glioma (DIPG) is found in a part of the brain stem close to the top of a person’s spinal cord. Statistically, Lauren won’t live more than two years from the time of her diagnosis.

Lauren’s response to her diagnosis was to become the face of life and hope for others, not death.

Told she would not live to see Christmas 2014, Lauren not only celebrated Christmas, but she also has raised more than $1.15 million dollars for The Cure Starts Now Foundation. In 2014, Lauren was her high school’s basketball homecoming queen. January 2015 found Lauren returning to her high school and crowning the 2015 basketball homecoming queen. Lauren’s mom, Lisa Hill, described the event as “another goal met” for her courageous daughter.

Although DIPG has now caused Lauren to use a wheelchair, thus taking away the opportunity for Lauren to play basketball, Mount St. Joseph has made her an honorary coach for their basketball team.

In a recent issue of People Magazine, Dan Diaz, Brittany Maynard’s husband described some of the emotions he carries with him daily, since his wife’s death. Mr. Diaz says there is always a “feeling of loss” for his wife.

Unquestionably, with any loss of a loved one, there is a daily feeling of emptiness for them in our life. There is also the thankfulness of the ending of their pain or suffering, if their death was due to illness.

The feeling of loss for those of us left behind is not only the loss of the person for us, but the loss of life experiences for the one who is gone. Does finding a cure for your own healing and that of others create a deeper sense of fulfillment? Is that enough to want someone to live rather than die? Can the desire to live and experience life as it is ordained create enough desire to “stay” until the end?

Watching a slow end to life, especially when filled with pain, is difficult. No one can minimize that fact. But every life has the opportunity to positively influence and further a positive cause for society.

Where the fight to die with dignity will help a portion of society, the fight to find cures for currently incurable diseases helps so many more. The legacy of hope and dignity is courageously seen in people like young Lauren Hill.

While our hearts reach out to comfort families of those who choose to end their lives early, their choice leaves us never truly knowing what influence they might have had in the world. Many people, young and old, who are suffering as Lauren and don’t know when the end will come, have an incredible opportunity with the time they are given. Their fight is so much more powerful in creating hope. No one knows the amount of time we are given on this earth; how we choose to use it is most important. Lauren Hill has chosen life in death!

Research Claims Children are Better Off Without Religion or God