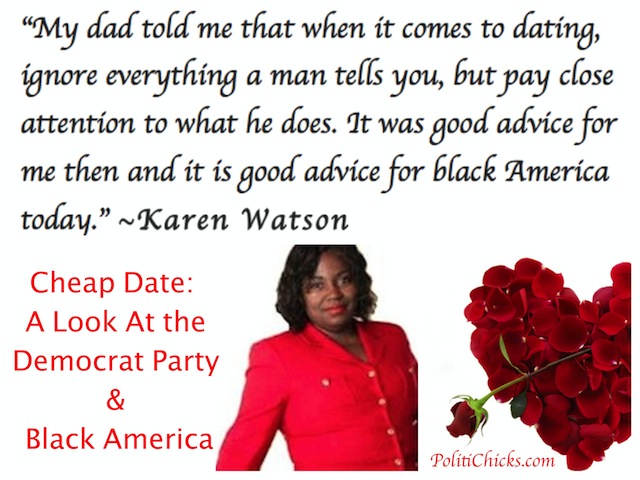 “More and more the Negro vote is becoming a decisive factor in national politics. The Negro vote is the balance of power in so many important big states that one almost has to have the Negro vote to win a presidential election.” ~ Martin Luther King Jr. in his Aug. 30, 1957 letter to Richard Nixon

As we prepare to celebrate Valentine’s Day, the roses that were once fifteen dollars for a dozen have inflated to more than triple their prices just days ago. Why? Because no one wants to be a cheap date. But why has the black vote continued to be a cheap date for the Democratic Party?

In recent years black America has voted overwhelmingly for the Democratic ticket and has received only sweet nothings. The Democratic Party could not have won any of their statewide elections within the last two decades including the 1992 and 1996 elections of Bill Clinton and the 2008 and 2012 elections of Barack Obama without the overwhelming support of black America. If Mitt Romney would have garnered eighteen percent of the black vote in 2012 he would have won by a landslide – such is the value of the black vote!

One would assume that such a precious commodity to the Democratic Party would be valued as such. Absolutely NOT! One would also assume that under the current Obama Administration the welfare of black America would have a high priority in this administration. Absolutely NOT! The world’s greatest optimist would be dismayed at the status of black America under the Obama administration. According to the most recent US Census Bureau 11.5 percent of African Americans live in government housing or section 8 housing while 13.6 percent receive TANF (formerly known as welfare). Slightly over 25 percent of African Americans receive SNAP (formerly known as food stamps).

In 2009- 10 the national graduation rate for Black male students was 52 percent, New York state had the lowest graduation rate for Black males of 37 percent followed by the District of Columbia at 38 percent. Of all adults arrested in 2012, 27.6 percent were Black. The percentage of black adults arrested for murder was 49.3 percent. Black juveniles accounted for 51.5 percent of all juveniles arrested for violent crimes. Blacks only make up 14 percent of the population.

The Democratic Party takes no issue with inciting riots over Ferguson and Eric Garner but are silent on the real troubles of black America.

My dad told me that when it comes to dating ignore everything a man tells you, but pay close attention to what he does. It was good advice for me then and it is good advice for black America today.