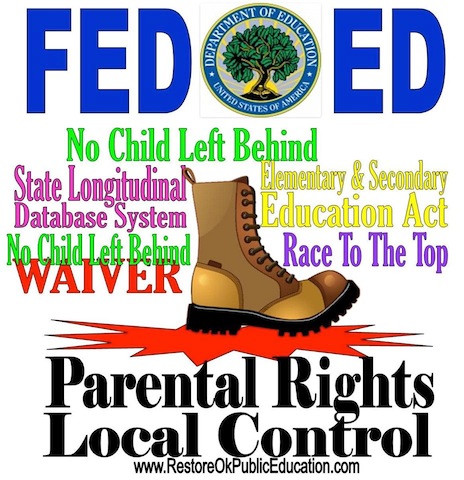 This is a new call to action to stop Senator Alexander from “helping” us. Monday, February 2, please take a couple of minutes to send an email to [email protected], to Senator Alexander and also to your own Senators.

When Oklahoma repealed Common Core, the federal government tried to punish Oklahoma by revoking the No Child Left Behind waiver, for which Oklahoma should have responded “Who cares?” Instead, our press reported it as if the entire education of our children would no longer happen without the federal approval of our own state standards. It was the biggest Kabuki Theatre display of the year.

Since 1965, when LBJ spent the first federal dollars on education, we have had one federal education program after another. Each administration adds to it and re-gifts like a bad fruitcake. From the first Elementary and Secondary Education Act to Clinton’s Goals 2000, to Bush’s No Child Left Behind and now onto Obama’s Race to the Top, two things are consistent. The cost and requirements grow while actual education is stagnant.

When will our Congress and Senate stop making laws that are not enumerated as their jobs?  When will states stop allowing the Federal government to tell them what to do when the power actually belongs to the states? In education, the power is in this order: parents, local districts, state… PERIOD.  It should end at the state. Our federal legislators should be abolishing the Federal Department of Education.

Now is our chance to ask Senator Alexander to stop these programs rather than tweak it again. States should not be jumping through hoops to please the federal mandates in education. There should be no federal Department of Education at all.

One of my favorite Common Core fighters and education bloggers, Shane Vander Hart from Truth in Education has written Senator Alexander an email that you may use as an example.  From Shane:

I sent an email to [email protected] (today is the last day you can provide feedback). My email was short and sweet.

Myth: We Caused Radical Islamists to Hijack One of World’s "Great Religions"