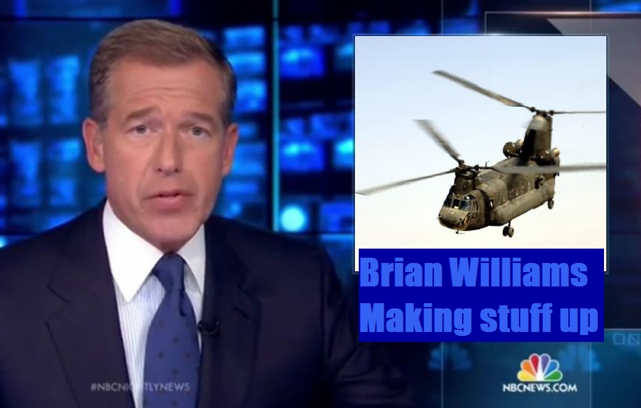 NBC Nightly News anchor Brian Williams has recanted his claim that he was onboard a helicopter that was forced down by RPG fire during the Iraq War in 2003.

According to the Blaze, Williams has said,

“The story actually started with a terrible moment a dozen years back during the invasion of Iraq when the helicopter we were traveling in was forced down after being hit by an RPG. Our traveling NBC News team was rescued, surrounded and kept alive by an armor mechanized platoon from the U.S. Army 3rd Infantry.”

However, despite Williams’ touching story, “…crew members who were actually onboard the 159th Aviation Regiment’s Chinook that came under small arms and RPG fire reportedly told Stars and Stripes that Williams and his NBC crew arrived safely on a different helicopter roughly an hour after they made an emergency landing.”

In addition, Sgt. 1st Class Joseph Miller who was the flight engineer on board the chinook that Williams and his NBC team were on board confirmed as well that they received no fire.

Williams has told this fabricated story many times over the years at NBC but the most recent retelling, which led to him being caught in a falsehood, occurred last Friday when he repeated his story in an attempt to pay tribute to a soldier.  He was called out over his lie on Facebook.

Williams issued an apology on Wednesday evening during an NBC newscast. Author Brad Thor also called out Williams in a twitter rampage.

I see William’s apology as merely nominal;  however I do give him credit for handling his apology in a very professional manner. Nonetheless, I don’t buy the idea that it was “an honest mistake” which seems to be what Williams wants us to believe and he may very well have been forced to apologize.

Not only have I lost what little faith I had in Brian Williams as a journalist, but what little faith I had in NBC News as a network is also destroyed as they have allowed him to tell this lie for years. Williams was not the only member of NBC aboard the Chinook that day. Why didn’t someone else call him out on it?  I cannot conceive how one could possibly make a “mistake” like that, as Williams would seem to desire us to believe.

Regardless, this is a huge blow to the credibility of both Brian Williams and NBC News. It would be bad enough if this were just a personal story Williams had lied about, but it is so much worse because it is tied to the military and an alleged news story. The job of a journalist is to uncover and report the truth.  Brian Williams is a disgrace to journalism!

Watch the video in which Brian Williams discusses his helicopter being “shot down” with David Letterman (lying starts around 4:38):

“Two of our four helicopters were hit by ground fire, including the one I was in.”

“What altitudes were you hit at?”

“We were only at a hundred feet doing a hundred forward knots because we had these massive pieces of bridge beneath us on slings.”

“What happens the minute everybody realizes you’ve been hit?”

“Uh, we figure out how to land safely, and we did. We landed very quickly and hard and we put down and we were stuck. Four birds in the middle of the desert, and we were north out ahead of the other Americans.”

Which Part of “No Tax Credits to Illegals” Do You Not Understand?