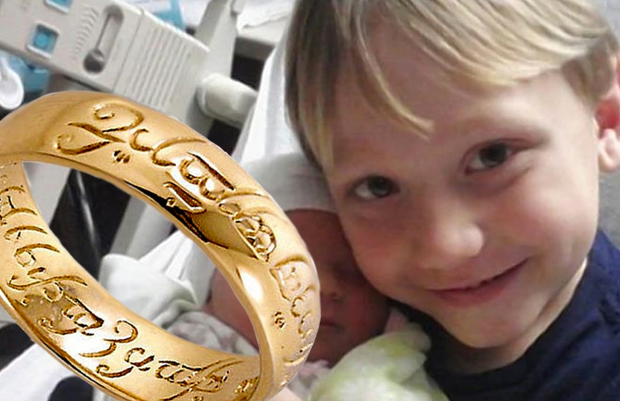 A 4th grader in Kermit, Texas, was suspended from school last week after he said he could use his “ring of power” (Tolkien reference) to make a classmate disappear. It was his third suspension since the beginning of the school year.

According to nine-year old Aiden’s father, Jason Steward, the Kermit Elementary School principal labeled Aiden’s behavior a terroristic threat, suspending him and declaring that “threats to another child’s safety would not be tolerated, whether magical or not.” His previous suspensions involved referring to an African-American child as “Black” and bringing a copy of DK’s Book of Knowledge to school to show his teacher during the class study of the solar system. A picture of a pregnant woman was deemed inappropriate, so Aiden was suspended. And I guess calling a Black child “Black” is worthy of suspension as well?

Whatever happened to having to stay after school for misbehaving (if, indeed, any of this could be considered misbehaving…)? When did a child engaging in imaginative play become a reason for suspension? Using the wrong word? Bringing a book to school because he is excited about learning and wants to show it to his teacher? How ridiculous this all is. This is such a far cry from when we played cowboys and Indians or cops and robbers during recess at school.

Childhood is a time for creative, imaginative play. Why would we want to stifle that in the place where many children spend the majority of their waking hours? Kudos to the teacher who inspired Aiden to read more about the subject they were studying, but why punish him because there was a picture in a children’s book that made someone uncomfortable?

I hope that Aiden’s parents consider the long term effect that an environment like this will have on their son. He is obviously a bright, creative, and energetic child. It’s too bad those qualities must be stifled for him to fit in and succeed in the conformist, politically correct world that many public schools have become.

Florida PolitiChick Katie Abercrombie, native of North Carolina and a long-time resident in Florida, is a 20-year homeschooling veteran. Now that her four children are grown, she continues to indulge her love for teaching and learning by tutoring, substitute teaching, and teaching writing classes for homeschoolers. She earned her BS degree from Florida Southern College and her MA from Rollins College. BC, or Before Children, she served as the Director of Youth and Family Ministry at her church and has continued to be active in ministry and leadership in her current church. Homeschooling afforded her many opportunities to be politically active and she recently retired from a term on the Orange County Republican Executive Committee. Like Katie's Political Page on Facebook and follow her on Twitter @aberaussie.