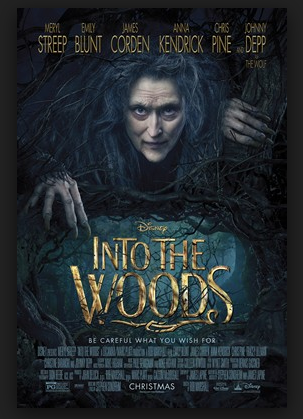 Directed by Rob Marshall (“Chicago”) and starring Meryl Streep (the Witch) and Emily Blunt (the Baker’s Wife), “Into The Woods” is an adaptation of a Stephen Sondheim and James Lapine Tony Award winning musical. The story is of a Baker and his wife who must gather objects for a vengeful witch in order to remove a curse placed upon the childless couple in order to have a child. Grimm Brother fairytales such as Little Red Riding Hood, Cinderella, Jack and the Beanstalk and Rapunzel are brilliantly intertwined in the story and help the Baker and his wife attain the objects. This Disney film adaptation from the stage musical is thrilling, clever, wonderfully acted and highly entertaining – until the last scene.

Having performed in several Sondheim musicals in my career, I instantly recognized the music (and patter in the songs) as being Sondheim. Although I was not familiar with the original stage musical to compare, the first three quarters of the film was excellent. How clever to have all these fairytales combined into one story (including a cameo of Johnny Depp as the Wolf) and Meryl Streep as the Witch was among one the finest performances I’ve seen of her. I loved the performance of Lilla Crawford (a very prissy Little Red Riding Hood) and James Corden (the Baker) was wonderfully charming and convincing. I was totally enthralled and sat loving every moment, till suddenly (and like a slap in the face) the last scene entirely changed the movie. After what seemed to be a happy ending, this wonderful musical turned bitter and depressing (adultery, death, endless whining, etc. etc., etc.) and not the least bit recognizable from the story so far. Perhaps the audience was meant to be shocked with “realism” (or some other lame excuse), however in the Hollywood of today it is all too common.

So if you enjoy Sondheim and a clever and fun musical, walk, don’t run after the happy ending scene. As soon as you see an earthquake happening (the Giants wife on a rampage to avenge the Giants death) it is your signal to get up and leave the theater. Otherwise you’ll be slapped with another one of Hollywood’s immoral moral lessons.

New Year, New Lean You: The Essential Formula to Building Your 2015 Fat-Melting Metabolism